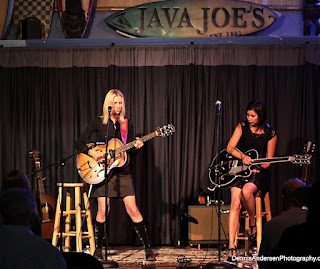 This weekend was Fathers Day but before Sunday hit I played a show with my new pal, Nena Anderson in Ocean Beach's best venue Java Joe's. Nena is a young up and coming songwriter that's getting some great attention on radio around the country and she was a blast to hang out with. We traded songs for hours, telling stories and playing a few cover songs, like Ring of Fire and an old blues she sang and who's name illudes me now.


I can hear the surf churning up the beach sand out my window. Some nights it gets pretty loud, even though I live two blocks away. I've lived here almost 18 years now, unbelieveably, sort of a little piece of paradise. Before moving to Encinitas, and in with my then-boyfriend Paul Williams, I lived in another San Diego seaside town, Ocean Beach: a vortex that summons forth a convergence of old hippies, dead beat poets, ex-cons, meth-houses and money.


Hanging out in Ocean Beach this weekend, churned up old memories of Paul visiting me from the Bay Area. He'd fly into the San Diego airport, just a few miles from OB, I'd pick him up in my VW Bus and we'd drive to LA for various music related adventures...like visiting Van Dyke Parks, Lenny Waronker and Howie Klein at Warner Bros, the sublime painter and a+r man of A+M Records David Anderle, and lots of other friends.


I have lovely memories of Paul and I hiking the cliffs and stones on the shoreline around OB north of the pier, stopping and sitting on sand stone and he reading to me a Theodore Sturgeon story from a dog-earred paperback. Or the times between Paul's visits where I'd bicycle around town, not a freakin' care in the world....and mornings walking out on the pier and sometimes spotting seals making faces at us humans....all the world is a beautiful miraculous place when you're in love.


On Sunday I picked Paul up from the nursing home he lives in. He's frail now, too frail to do much walking and so we helped him into a wheel chair and our 10 year old son Alexander, pushed him down the hall ways past the moaning, or smiling, or hollering patients that live there with Paul. He's probably 20 or 30 years younger than most of these folks, but he's no better off. Nursing homes are a place for those who can no longer care for themselves, no matter the age.


Paul is up for a drive around town. Before leaving our apartment I'd randomly grabbed a Bob Dylan cd from Paul's extensive collection so we drove down Coast Hwy listening to Freewheelin' Bob Dylan with Paul very happy for that, nodding his head now and then.


These days he's always working the lock or the window buttons and it makes me nervous..on sunday he finally did the thing I'd been fearing, he opened the door while we were in traffic. Somehow we got out of that unscathed but I realized next time I'll have to put him in the backseat with the child-lock on the door....


Corrina Corrina, played out over the car's cd player and it sounded great. I mused out loud that I loved the way it sounded and wondered who the guitar player was. Not missing a beat, and maybe the first thing he'd said to me in the two hours we'd been with him, Paul said "guitar player is Bruce Langhorne". I looked it up later, and he was right.