Look At That Grin

Here is one of those songs that comes out of the blue as a lovely little gift one day. Like a cat leaving you a dead bird on your door-mat. This one however came to me in a dream and when I awoke I went straight to the piano and hashed out some kind of progression.

The dream told me the story and conjured the atmosphere or sense of place where the narrator and characters play out their story. Sort of an odd love story.

The dream came to me in 1998 and on the heels of one of the worst emotional episodes I'd had with Paul. His brain injury had happened in 1995 and while he was reliant on me in some ways, for instance in remembering the story of what had happened to him during his recovery, or reading maps (for some reason the injury affected his ability to read them), by 98' he was beginning to feel frustrated with his reliance on others, notably me. So right up above my Wurlitzer piano was a small nick in the wall where he'd thrown the salad spinner the night before. Fortunately not at me.

I had just been reading Merle Haggard's autobiography and their was a quote he had under his photo/smiling face which said "Look at that grin, I think I'm losing but I'm pretending to win"....so I took that quote and played it out with the rest of the story. But this is no Merle Haggard type story...it's sci-fi aspect is probably more in line with Philip K Dick... if he'd been a songwriter 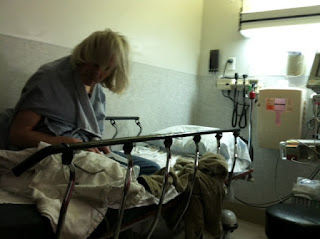 Paul was transported to the emergency room today. His nurse at the nursing home, a kind lady named Soledad, called me and said she was very concerned about him. Paul's pulse had dropped to 44 and he had an odd twitch on the right side of his face. She was calling an ambulance and wanted me to know. I asked her if it was serious enough for me to skip work and she said yes. I told her I'd meet him at the hospital.

On the ride over, by the way about a 40 minute ride to the town of Escondido, I listened to Steve Reich. I have a knack, when things get bad, to check out on-drift off on- something I feel passionate about, something that can completely take my cares away. Another person might drink or drive fast, I find a piece of music. And so I listened intently, to Reich's Music For 18 Musicians. And floods of arranging ideas came to me for my next album, visions like musical sugar plum fairies.

By the time I reached the emergency room I was pretty much high as a kite. Very propitious timing; I happened to arrive at the same time Paul's transport--straight from the nursing home--arrived and was pulling his gurney out the back door. I hollered, Hi Paul! and he smiled a huge, rather toothless, grin back at me. The paramedics said later "Paul was uncommunicative and unresponsive until he saw you".

He still wants to see us, those he knows and loves. And I wish there were more of us here in San Diego. But this is, what is.

That synchronistic timing reminded me of the time we were to meet one another in Brussels, Belgium...he flying in and me catching a train, and somehow we both managed, quite serendipitously,  to catch the very same car of the same shuttle into downtown Brussels. Very odd. Not quite as spectacular today, but still, we are, in tune.

At any rate, whatever medical condition he'd had earlier had righted itself and he was working at his normal rate of consciousness now. The paramedics wheeled Paul into the cubicle. The emergency room doc came in and and did some checking and speculated that Paul may have had a mini stroke or a small seizure. As is often the case, the doctor turned to me and said: Pretty young for him to have dementia. (he's 64). And so I gave him a run down of the bicycle accident and brain injury so many years ago. The doctor grimaced and asked what Paul used to do for a living. He was a writer I said, mostly about rock and roll, started the first rock magazine, but also he wrote about other writers. "Who's your favorite author Paul? the doctor asked. Paul said "Philip K Dick, ....(the doctor shrugged) ..he's a science fiction author. ....Blade Runner". The doctor said "Ahh, yes."

"Well", the doctor said turning to me, "It sounds like he's had a pretty full life,... full of adventures." And I agreed.

After hours of CT scans, x-rays and blood tests, with nothing found amiss it was time for Paul to be transported back to the nursing home. Ironically he got the same two paramedics. As we were awaiting the final paper work they started asking Paul some simple questions: What year is it? Paul: 2006. His answer was closer than on the way to the hospital when he'd thought it was 1974.

I told them he had written books, mostly about rock and roll music, especially from the 1960s. So they asked him what he thought about Pink Floyd ("That's pretty much the 70s" I said) and Deep Purple ("1970s again") they finally thought of a 1960s band and asked about the Doors. Paul did a big hearty two thumbs up.

And off they go, me waving "See you tomorrow!" my usual line, even when it isn't so. But he won't remember. 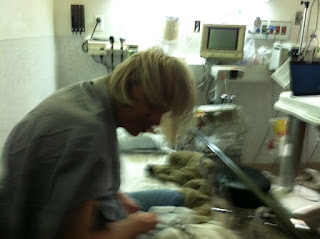