Friends of Paul Williams from the Frankfurt Book Fair 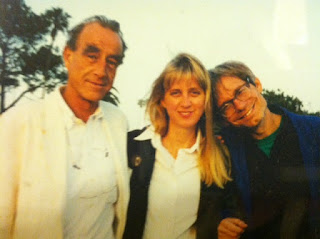 Me and Paul and his dear friend and book agent, Dieter visiting from Basel Germany, 1999 Encinitas 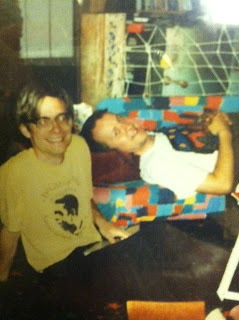 After Paul's bicycle accident in 1995 and after the months of rehab he went through to recover from the brain injury, Paul was offered and took on a lecture tour in Germany. It had only been six months since his accident and he was not quite "right"; quick to anger, easily confused by spacial-visuals like maps, so I accompanied him on the trip. It was wonderful. He'd have the talk in the evenings, on the performing art of Bob Dylan, and by day I'd get to wander the city streets exploring in ways I couldn't when I'd done my own tours of Germany.

We went to the Frankfurt Book Fair and stayed with a friend of his that helped make compilation albums of world beat artists, getting to hear some cool new sounds. This was around the time that Paul was toying with the idea of writing a book called The Love of the Singer about countries and large communities that were in love with a voice, a persona, that they felt spoke and sang for them. Some of the artists that were to be included in the book were Om Kalthoum, Jenny Lynne (from the US 1800s), Edith Piaf...etc. Still a book I'd love to read.

Freedy Johnston and Friends in Encinitas 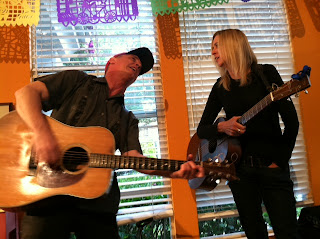 Hanging out this evening with one of my favorite songwriters Freedy Johnston at a house concert thrown by Dirk and Sally Sutro. 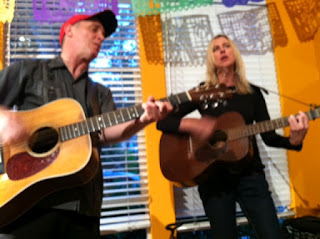 Freedy and I met in 1994 when he was touring for his hit album This Perfect World. Paul and I were big fans, then my band the Garage Orchestra did a bunch of shows with his. Playing at the Whiskey-a-GoGo, Great American in SF and the old Bottom Line in New York, stuff like that. 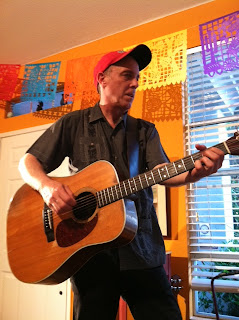 Tonight was a ton of fun. Freedy played some of his tunes then had me come up and we did a cover of The Cures Lovesong and Nick Lowe's Cruel To Be Kind. Took a break than I came up and did a few of my new tunes: Somebody's Angel which elaborated on a theme Freedy had brought up earlier, about a soldier coming back from war not quite the same. Mine about a spouse of a soldier having to carry on her life and reluctantly finding a new life without her war injured partner. 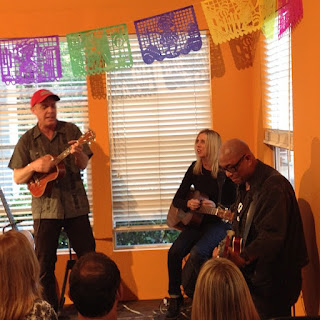 Severo Jornacion from the Smithereens joined us on the second set, playing bass and singing a third harmony. We were up there (without mic's you might notice) winging it on cover songs, some that the crowd would shout out. Some of the songs:  Summer Breeze, Sheena Is A Punk Rocker, the Beach Boy's Don't Worry Baby, Rhiannon, Only Love Can Break Your Heart, Cheap Trick's  I Want You To Want Me, Stephen Still's It Doesn't Matter, I Wanna Be Sedated... 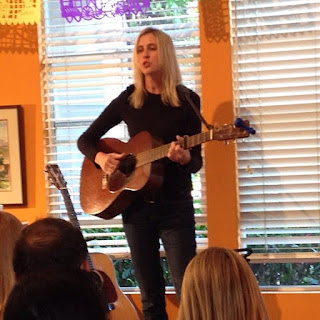 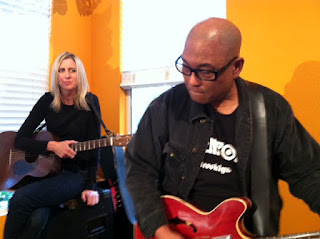 I met Severo in 1994 as well, at that point he was a fan of The Smithereens and was coming out to a bunch of the shows I played with them. Hanging backstage alot 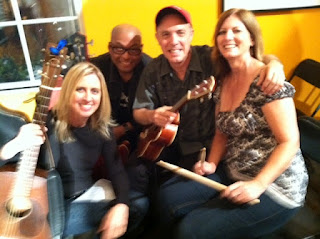 Here we are looking like Up With People. Paula Luber joined us on drum sticks and chair for a few of the songs 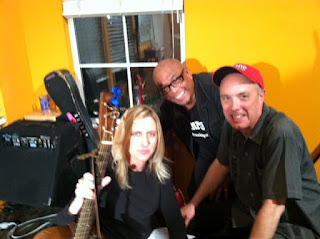 This is the money shot.. or, messed up losers from the trailer park. 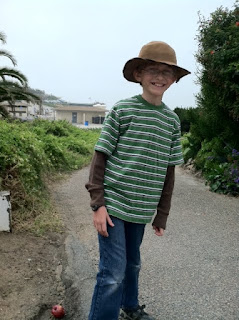 Alexander; walking the block to our neighborhood beach
Posted by Unknown at 11:18 PM No comments:


A little Alexander for the family and friends.
Sorry the vid skips around...haven't quite figured out how to get it off my iPhone properly...
Posted by Unknown at 12:05 AM 2 comments: 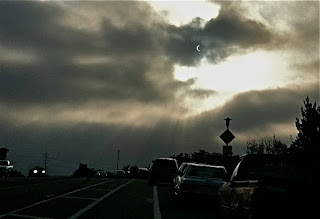 Todays Annular Solar Eclipse. 'Annular' apparently comes from the Latin word Annulus which means ring or circular....We caught this view on our way home from the movies (The Avenger's) and the radio station was playing Stan Ridgway's version of Ring of Fire, very apropos.


Our view was more of a crescent-shape however and looked like an exceptionally bright moon, the marine layer coming off the ocean acting like the perfect filter...


(this noir-ish photo was taken w/my iPhone and run through iPhoto, I didn't shoot in black and white, there just wasn't enough light for color)
Posted by Unknown at 8:26 PM 1 comment: 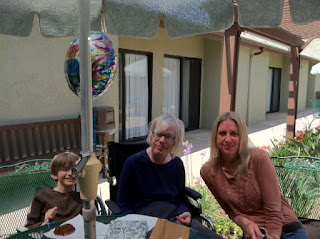 Spending the afternoon with Paul. Gluten-free cupcakes and sunshine at the nursing home.


I want to thank everybody that left comments here and on Facebook about how much Paul's writings have affected and/or influenced you. I read them all to him, every message,  and I could tell he was listening and their power was getting through to him. He still remembers who he is. Paul Williams the author, of over 30 books about; music, common-sense philosophy, Bob Dylan's performances, Philip K. Dick, Brian Wilson, and Crawdaddy Magazine...etc.. is still there, you can feel it, he's just gotten harder to access.
Posted by Unknown at 5:40 PM 5 comments: 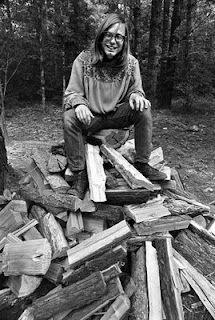 Paul's birthday is coming up in a few days. If you'd like to leave him a message, something brief, particularly about how Paul's writings/books have affected you, I will happily read them to him, (over some cake and ice cream).
*   *   *
"But living in the woods is not where it's at. Where it's at is living on the planet. I came to the woods because I wanted to live on the planet. Not in a nation. Not in a state of mind. On the planet, in the biosphere, right here where everything's happening, where I can't cop out on my responsibilities as God by playing with my Erector Set.
The planet is where we all live, not just some of us; and that's why it's so difficult to live here."

(excerpted from Apple Bay or Life on The Planet by Paul Williams, still in print and can be found at online bookstores I might add)
Posted by Unknown at 5:45 PM 13 comments: 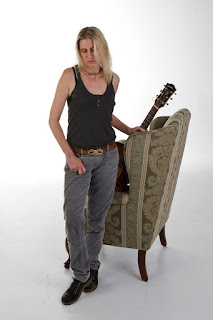 (photo by John Hancock)
Posted by Unknown at 9:37 AM No comments:

Lunchtime at the Nursing Home 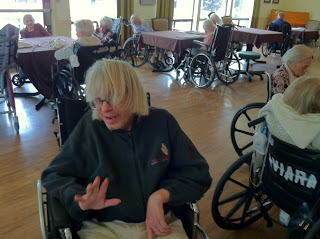 Everyone's asleep at lunchtime. Seated next to Paul was a man also named Paul who says he got a degree from MIT and had been a computer programmer. He's in his 70s or 80s so he must have been in the early days of the computer industry. He actually couldn't remember his own age and his nurse was sort of guessing. I actually thought he was around Paul's age, in his early to mid 60s. But who knows in here.

At a certain point it just becomes a sea of gray, no matter the generation one came out of, no matter the race, no matter the background story. It's all white hair and grey pallor to the skin. And at this destination all must listen to Frank Sinatra and Perry Como and Dean Martin. Some management or executive's idea of what these people should want to hear.

This is what I'd like to play them today: Mississippi Fred McDowell's "Goin' Down To The River", The Ramone's "I Wanna Be Sedated", Hall and Oats "Your Kiss is on My List", "Sally Go Round The Roses", Tim Hardin's "Don't Make Promises You Can't Keep", Modern English's "I'll Stop The World and Melt With You", Bill Wither's "Using Me", anything by Marvin Gaye (I'd just play the whole record), Stereolab's "Wow and Flutter"...
Posted by Unknown at 2:28 PM 1 comment: 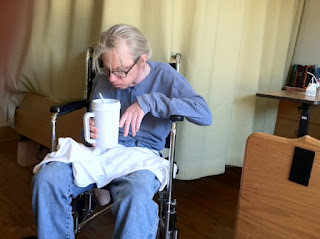 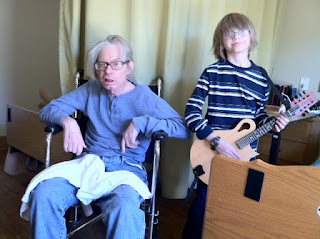 Well I knew we were getting close but the time has come to report that the Paul Williams donation bank account has hit zero.

Once a year I pay an elder law attorney, a kind man who gives me a cut rate, about a thousand bucks to help us keep Paul on his special Medi-Cal program. Once a year Medi-Cal asks us to prove that Paul is worthy, eligible for their care. Proof that he truly does need to be cared for in a nursing home. And that he, and we, can't afford to foot that bill.

So I gather latest bank account statements, and work pay stubs, and title to our car and send them in to the attorney who fills out the endless paper work, questions that were answered exactly the same for the last 3 years.

So what do people do who don't hire an attorney? They must be hyper vigilant about getting it all done and in on time (if you're late the game is over and you lose). Last year Medi-Cal rejected Paul's request for continuing care and we had to start the process all over again. I was very thankful to have the attorney helping me on that.

It's worth it, getting the help. Like paying for a mechanic to fix your motor. Sure you could probably do it, but do you have the time, the patience, the knowledge and the tools to make it work.

I look at things as projects. You know how your teacher in seventh grade would say: "okay class you need to pick a project about ancient history and it is due in two weeks". I liked projects; when I knew I could be creative with them. I was never the kid that laid out all the facts with bullet points. I'd write a song or a play about it, and then other kids would copy me (on the play anyways; it was called Pompeiino: ABoy, and it had a song in it about the volcano erupting and destroying the Roman city of Pompeii).

Moving papers around, collecting evidence and organizing it, is not my strong suite. So I suppose it's okay to spend that last thousand bucks on making sure Paul can stay in his nursing home for another year.

At least that's what I tell myself, now, as I make out the check.

If you'd like to find out more about Paul Williams and/or donate to his continuing care here is a link ( a lovely site put together by a team of Paul's dear friends three years ago):
http://www.paulwilliams.com/index.html
Posted by Unknown at 8:54 PM 2 comments: