When I was a kid there was a popular song that told of a soldier who'd come back from war paralyzed and in the lyrics he was imploring his wife Ruby, to not take her love to town. She was apparently a floozy, I sorted out later, 'cuz what kind of wife would doll her self up and go into town nights. I'm not sayin' it's one of the best songs ever written, I can't be objective enough for that, but I can tell you it effected me enough as a little kid that the lyrics would go through my mind time and again. Other songs along the same lines, that stuck with me were Skip A Rope (Henson Cargill) and Jackson (We got married in a fever hotter than a pepper sprout, we been talkin' 'bout Jackson ever since the fire ran out..)...these songs were all trying to tell me something about what the future held for us little kids...like some mysterious cryptic Cuneiform, that would let on just what it was to be an adult.

Somewhere along the way I realized that the Ruby in the Kenny Rogers song represented some kind of bad person, a woman that didn't take care of loved ones. I was a teenager in rural Ramona when Kenny Rogers came to play a concert in a remote part of our back-country. There were probably about a hundred of us teens and young adults on a lawn while he played through his hits. I don't remember much except that everyone sang along with the part of the song that went...."oh Ru-u-by,Don't Take Your Love to Town".

As a spouse to a man who had a serious brain injury which later turned into early onset of dementia....I've come to see Ruby in a new light. Within the lyrics you see that she's at home with him by day, and by night she goes out...but doesn't she deserve a life beyond being a care-giver? Maybe she goes to bingo at the church, maybe she meets a girlfriend for tea, or maybe she has a clandestine affair with a man, or maybe she's dancing with the lipstick lesbians at a dive-bar. Ruby deserves to discover who she is despite the fact that her husband can no longer do the things a husband can do.

I met a young woman a year ago, she had just lost her husband to the war inAfghanistan, she'd come to me for guitar lessons. She was pushing herself to do things she hadn't done before, to find ways to move on, discover who she was now....It's very hard work, this moving on business. But it's the business of life. Loving.
Posted by Unknown at 3:41 AM 7 comments: 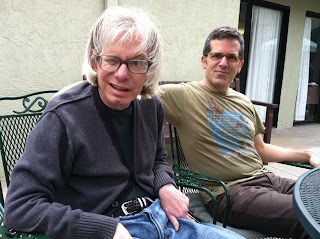 She Enjoys Her High Life 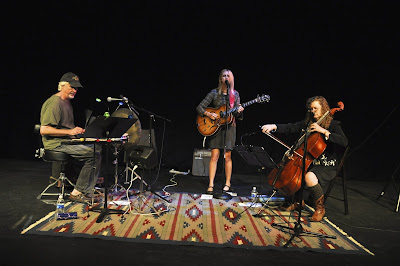 photo credit: Peter Meade
Randy Hoffman, CLB, Renata Bratt @NVA Theater 10/8/11
Thank you Brendan Coakley for writing and reminding me of this passage from Paul Williams book Das Energi. These particular words really speak to me right now as we approach a full moon in Aries.
"She enjoys her high life; does not enjoy anxiety. So she stops hesitating and does what she has to do.
She does not live in a state of bliss, though perhaps she feels herself moving toward one...
or toward...something, she doesn't know what it is but it is the way she has to go, the journey toward it is the only life she enjoys.
It is hard, it is exciting, it is satisfying, lonely, joyous, frustrating, puzzling, enlightening, real; it is her life, that's all.
She accepts it. Sooner or later a person begins to notice that everything that happens to her is perfect...." Das Energi, 1973
(Paul wrote Das Energi at age 22 while living on a commune off of Vancouver Island)
Posted by Unknown at 8:09 PM No comments: