Paul Williams and the Gospel Songs of Dylan Documentary

I think I remember the film maker coming out to our place and interviewing Paul in the early 2000's. Maybe 2004 or 05. You can see my nifty Wurlitzer sitting behind him. I do remember the film maker trying to get ahold of Paul around 2007 to see if Paul liked the way the documentary turned out. Sad that Paul was never able to get back to him.

Thank you Johannes Wilbrand for emailing this link over to me.

Geez, watching this, I sure do miss him. What a wonderful,
brilliant wack he was...just my type.

PS: you can also find him on this Philip K Dick documentary at 1:27, 7:42 and 9:14. Paul was a good friend to the science fiction writer and, after Phil's death, became the literary executor of the estate for a while.


New song and a little film-short to match. Thanks to the fisherman who was willing to 'co-star', the Oceanside Police Dept. for the $56 parking fine (my front wheel was over the line a few inches)
... and to PS and B for the inspiration


Friday I visited Paul Williams at a nursing home in Encinitas. Formerly an accomplished author and rock critic, Paul is now in the late stages of dementia. I was afraid I'd have to steel myself to see how far gone he was. But once I got over my dismay at seeing him bent over and drooling on a book he seemed to be reading, it was actually a pleasant visit.


I reminded him who I was and said I was glad to see him. He responded with a flash of his old smile and hugged my arm. When we held hands, I marveled at how strong his grip was. He seemed to relish touching and physical contact.

I mentioned people we'd both known, friends from the '60s, and that elicited a few coherent sentences. "Do you remember Larry Stark?" I asked. "I lived with him," Paul said. At one point he even asked me, "Is there a new book by Phil Dick?"

When I was leaving, I caught a glimpse of the book Paul was reading. The cover illustration was a photo of a glowing nebula and at first I thought the book was a science fiction paperback. But the title was "Does The Creator Have A Plan For You?" and it turned out to be a religious tract from the Watch Tower Society.

"Do you think the creator has a plan for you?" I asked Paul. "I don't know," he answered. 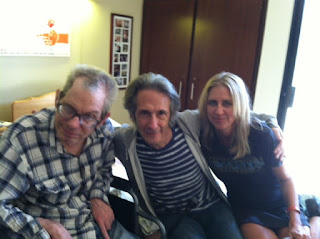 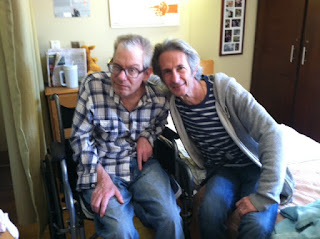 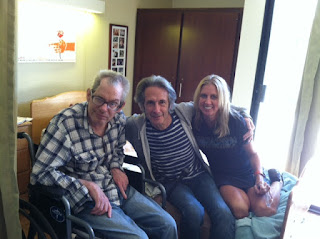 My Son The Scientist

An essay for science class by Alexander (he's age 10 but turning 11 next week):

My scientist is a theoretical physicist named Allan Adams. He studies String Theory, the cross between particle physics and gravity. According to String Theory, instead of particles being 0 dimensional, they are 2 dimensional  "strings". These strings can be "open", with the ends sticking out, or "closed" with the ends put together in a loop. Both strings can oscillate, like a guitar string. These oscillations create physical properties such as mass or spin. For example; Einstein said that the energy of a photon, a particle of light, is related to it's color or frequency of oscillation. The more it oscillates, the higher the energy. This is similar to Einstein's theory, E=MC2. Combine the two, and you you get the real world, a place where there is a similarity between frequency of oscillating "strings" and properties of mass, where quantum and relativity theory are all the same thing. And that's just the basic picture!

As a theoretical physicist, your intellectual traits have to be infinite, eternal, forever, but at the same time inflating. You always have to be able to learn from your mistakes, and be prepared to make them. You have to be open to new ideas, old theories crossed out, new entirely different ones created. New questions arise, as old answers are proven incorrect. Long lasting questions still hang in the air, with a million answers waiting to be found. That's what being a theoretical physicist is all about, not finding the one big answer to everything, but the trillions of small ones, that have enough answers to fill the universe.

Something interesting about Allan Adams is his preference for black boards to white boards. His reason? Millions of beings, tiny bacteria called coccolithophores on the surface of the ocean died, and sunk to the bottom. More and more died, and their calcium carbonate-filled skeletons piled up on each other forming a limestone mud. As they got exposed to more heat and pressure, they hardened into what we now know is chalk. then other rock gets metamorphosed and we stick it on the wall. Then we rub the other bit of rock against it, and "we're doing theoretical physics! How cool is that?"-Allan Adams