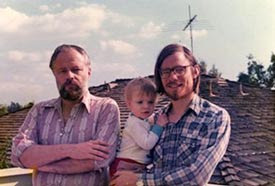 A few months ago I made the dreaded trek to our storage space, in fact it was prompted by a visit from Paul's dear friend Laura, she very kindly offering to help me pilfer through some of the many files of letters Paul kept. Letters and papers related to her father, visionary science fiction writer and literary hero
Philip K Dick. A good number of films have been based on either writings of Phil's or inspired by his writings (Total Recall, Blade Runner, Minority Report etc). As many of you know Paul was a friend of Phil's and after Phil's death in 1982 the family made Paul the literary executor of the estate.
There, at storage space 44, amongst the boxes of papers, cassette tapes of multitudinous Bob Dylan shows, varieties of used books, and Paul's own books, I found a virgin box of his books called Only Apparently Real, which is a charming little book about his friend ship with Philip K Dick and conversations with Phil including the 1975 Rolling Stone profile piece.
I have a lovely relationship with this book. It's very dear to me. It was one of the first of Paul's books that I read after meeting him in 1992. Recently I've ventured to rereading it, loving again, the first paragraph in the introduction....
"To give a sense of who Philip K. Dick was or is, I must bring him into the present, or, if you prefer, bring you into his presence. Often what we feel when we are struck by a person's writing or music or art is the presence of that personality; Picasso is a good example. Some personalities dominate us completely by charming us constantly. This can be a problem in life or politics, but in the creative arts it is most desirable. Consider Mozart or Shakespeare. And such is the nature of charm that we often fail to notice that we have fallen under a spell. "
* * *
In the stories of the Buddha there is often a reference to a friend of his, the venerable Ananda who accompanied the Buddha, it seems, most every where. Ananda appears to be one of those guys that has the genius capacity to remember everything spoken. And indeed that was his job with the Buddha, he remembered what was said at a speaking engagement and relayed it back to the community of monks. An especially formidable talent in a time where few could read or write.
This Ananda character has always fascinated me. Someone who had that kind of memory, remembering whole speech's or conversations. It's an unusual genius. Something that seems to be in savant realm. As a teenager I had a friend who had an older 30 year old brother they used say he was mentally retarded, Rocky, he could remember every line from a TV show he'd seen, or who said what in an Abbot and Costello film. He was a savant and a sweet heart.
Paul had this kind of memory. He really had an immense ability to retain facts. You can see this, to some extent, in the conversations transcribed in Only Apparently Real. Often Philip K Dick defers to Paul on information about Phil's own life, dates and times. Paul becomes a sort of Ananda to Phil's Buddha.
* * *
In 1999 Paul decided to memorize The Diamond Sutra from the Buddha's teachings. He was proud of the fact that he could take a walk on the beach each evening and recite it to himself. It was impressive but I wondered what it was for. He didn't talk much about what the words meant actually.
Paul and I were separated most of that year, shortly after we got back together Paul went on retreat at our local Buddhist monastary, Deer Park, which is a community started by Thich Nhat Hahn (who mostly lives in France) and his monks and nuns. Thay (Nhat Hahn) was over seeing this retreat and invited the community to go on a silent mindful, slow walk up the nearby mountain one afternoon. Near the top the group sat or stood in silence looking out over the California chapparal. Then Thay invited the members of the group to speak if they so wished. Paul spoke up quickly, according to him and a friend that was present, and began to reel off, in its entirety, the relatively long (maybe 20-30 minutes) Diamond Sutra.
What did Thich Nhat Hahn do, I wondered. Did he keep his cool? Evidently, though several community members tried to get Paul's attention and get him to stop, Thay did not. In fact he asked Paul to continue allowing him a chance to play out his Ananda abilities. I'm told Thich Nhat Hahn sat back and enjoyed the view and the words.
Posted by Unknown at 9:04 PM 4 comments: 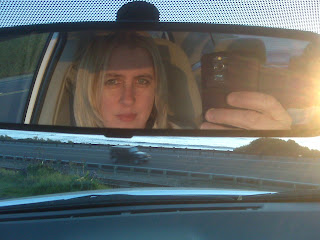 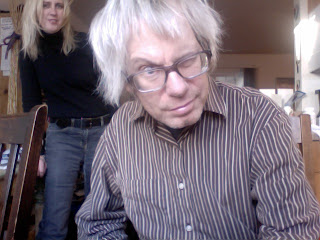 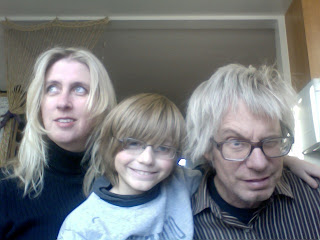 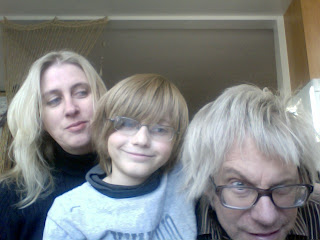 The family that mugs together stays together, eh?
* * *
Update: post car accident.
Our car was officially declared totaled last week. Now they'll be sending around some kind of check for me to go out and buy a new car. It turns out the guy that caused the crash is in dispute as to whether he actually has insurance or not. Apparently he hasn't paid his bills. At any rate, he was driving a rental car and I'm told the rental company will then have to pony up for the bill.
As some of you friends know, I've been coping with alot of lingering head and neck pain post accident. The hardest part for me is not being able to get my constitutional exercise which is normally running 1-3 miles about 5 times a week. It sucks. And then the second hardest thing is being at work, teaching some really cool kids that are excited about playing guitar riffs, and having to keep on the thermal shoulder wraps and doing the advil. I'm hoping to pick up some vicodin at the doc's this week. At least a glass of wine helps in the evenings.
I'm able to do about half as much stuff as normal, kinda pacing myself. Alexander is doing much better. He has some neck and head pain when he's working for an hour or more on Lego's but otherwise he says he feels pretty good. We've both been going to a chiropractor. I've also been talking with a local attorney that was recommended by a good friend.
Posted by Unknown at 7:46 PM 4 comments: