Before I go into the particulars of our weekend recording session I want to thank those of you that made it possible through your donations.
It's time to mix the 3 songs we have recorded and therefore I ask those of you that haven't donated to please consider doing so. We are at that point where we will need cash in order to move forward.

Please help me realize my goal: first studio sessions (and hopefully full album) with the Garage Orchestra arrangements since 1996! 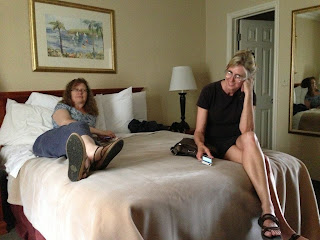 Before our first day of recording I met up with Lee Ray and Renata Bratt at their digs in Santa Monica. They'd driven all the way down from Santa Cruz. My drive up from San Diego took only a few hours but I spent a good deal of time packing up the guitars and the 6 foot long metallic Wall Heater into my little Toyota Corolla. Somehow it all fit in. 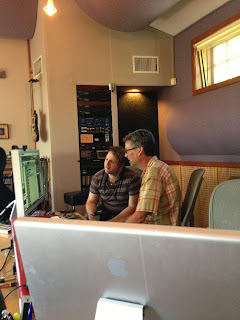 Lee Ray and Justin going over sounds and tones. Lee came down from Santa Cruz to engineer the sessions for us. He is the recording/sound genie at  Open Path Recording Studios 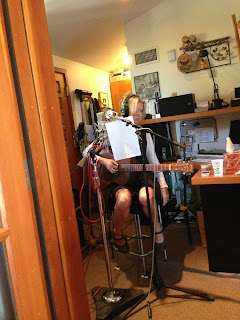 Getting' ready to play Horsepower. We set up the Wall Heater and Nelson starting wailing on it. And I mean wailing 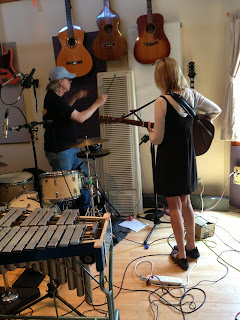 Here he is perfecting the Horsepower beat on the Sonic Monolith. Nelson Bragg and I met while he was on tour playing percussion for Brian Wilson (this past year he did the Beach Boys tour!). I was back stage hanging out with Brian's band, I met most of them over the years via mutual musical persuasions, and there was Nelson offering to play music with me one day. It took about 10 years, but here we see the day finally arrived. 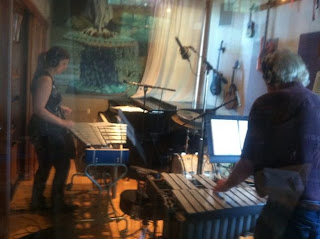 Randy Hoffman has played vibraphone or percussion with me since before Garage Orchestra came out in 1994. He was mentored by one of America's great avant garde composers, Harry Partch. Randy played with the Partch Ensemble for 20 years playing some of the toughest instruments to bring forth noise : Cloud Chamber Bowls, The Bloboy, Quadrangularus Reversum...Randy told me the Bass Marimba was really dang huge and tough to play.

My long time friend Paula Luber has sub'd for Randy on some tours in recent years so I decided we might as well have two vibraphones playing at once. Later we had Nelson come in and all three of them were on the vibes at once. It was a rather Steve Reich moment. 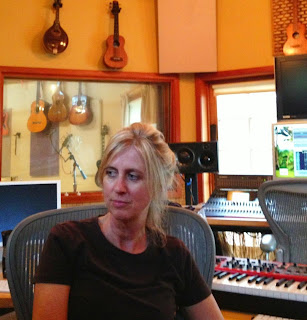 David's recording studio and it's fine array of musical toys. This photo was taken the night before we began recording and I'm pretty knackered. I'd spent the afternoon packing bags for LA, guitars, getting my son to his 4-day-sleep-over (thank you Hahms and Nena Andersen!), and foisting the 6ft Wall Heater into my Corolla. No small feat for 3 weeks out of surgery.

I'm feeling much better, almost 4 weeks from appendectomy, I'm walking 2 1/2 miles and I did Four sit-ups today...(ha!)...I held my own in those 10 hour studio sessions. 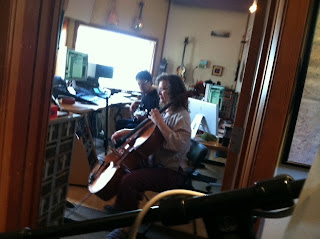 Renata Bratt and David in the control room playing parts for Horsepower. Renata and Randy and I began playing music together back in 1993 and recorded two studios albums as the Garage Orchestra. Then Renata moved away. Now and then I spirit her back to Southern California or off on a tour or into the studio.... Such was the case here. She was the one take wonder. 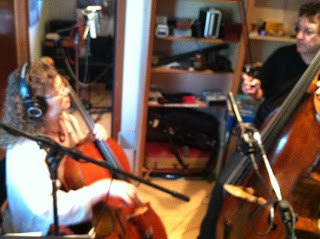 David is one of those rare birds that has had success in the field of music and is actually a really nice guy. He doesn't have to be, he's done so much good stuff. But he is.
You can find David's music on the theme to Deadwood and the score to Northern Exposure as well as A.D.

Besides that, he has an amazingly lovely family. His daughter, singer-songwriter Lucy Schwartz, sang harmony with me on I Like Cats/You Like Dogs. She has a new album coming out in August and they were filming a music video on another part of the property while we were recording, starring animals. So it was an animal day. 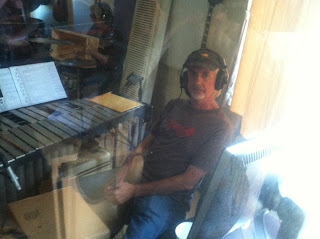 Randy kickin' back by the Cardboard Box, which lead us through 2 of the 3 songs this past weekend. We recorded 3 songs in 3 days. Not bad. I can't wait to play it for you guys.

I'm very excited today. This weekend will be the start of a new era for me. I'll be in the recording studio  for the first time since 2006. And my last album, Beloved Stranger, released in 2008, was made under very difficult circumstances, at a time when my son was very young and my husband was becoming very ill. It was an incredibly difficult period.

But now is a new time. It's a fresh start. I wrote a lot of songs over the past three years and it's time to record them and set them free.

Here's my pal Freedy Johnston, wavin' the flag and
supportin' the cause 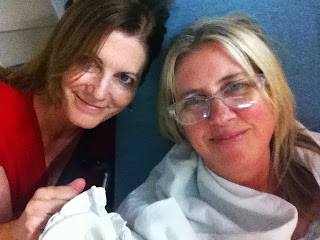 here i am happy in the er on drugs

Two weeks ago I had a stomach ache. I had it the day before but not so bad I couldn't run my customary 3 miles before work. But by the evening time I was in a good bit of pain. I took two Tums and went to sleep. Surprisingly, I slept for a solid eight hours. My girlfriend Paula (god bless her), who some of you know as the doctor friend that often plays glockenspiel or vibraphone with me and is a medical doctor, called and asked how I was doing. I told her the hurt had moved down into my lower right abdomen, she had me press on the spot and when I winced she said "I'll be right over". When she arrived she said get your stuff were going to the emergency room, you have appendicitis.

And so I did confirmed by both emergency room doctor and CT scan. By 9pm I was under anesthesia and feeling no pain (actually before I went to the OR I got this great drug called Fentanyl...I was ready to dance on table tops and go home).

Anyways the anesthesiologist promised me a trip to Paris and when I awoke it didn't feel like she held true to her promise. I was groggy but Paula drove us home, to her place, draggin' in at 2am.

For the first week after surgery, (laproscopic stylie), Alexander and I had a number of friends bring us food, flowers and fun. I thank you all from my heart for the help and the dinners.

Alexander spent several nights at my pal/singer-songwriter/Nena Andersen's house, down the street, and her son Ellis showed Alexander how to catch a wave with a body board. 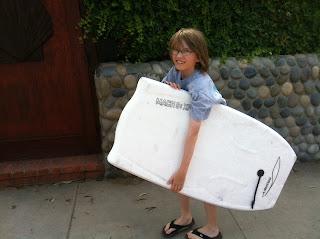 Then Nena took the boys to the Del Mar Fair 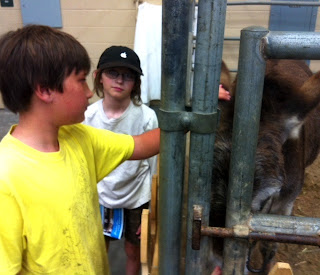 Alexander did not find the animals spectacular 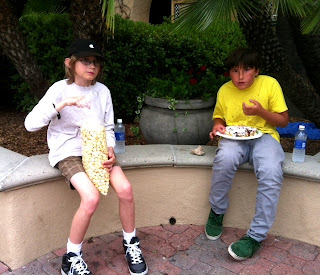 A division of interest in junk-food 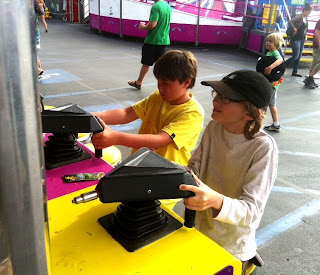 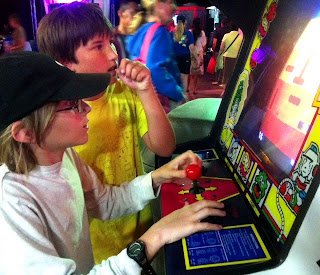 And a shared sense of awe and wonder at old timey video games.
*
I'm on the mend. Back to work this week. Taking long walks. Kinda tired but pretty much off the pain meds.
Not ready to run my customary 3 miles yet...
But getting revved up about going in the studio to record next weekend.

photos of the boys by Nena Andersen