"Daily doses of a drug used to treat Parkinson’s disease significantly improved function in severely brain-injured people thought to be beyond the reach of treatment, scientists reported on Wednesday, providing the first rigorous evidence to date that any therapy reliably helps such patients......"
http://www.nytimes.com/2012/03/01/health/research/parkinsons-disease-drug-may-help-brain-injuries-report-says.html?_r=2
Posted by Unknown at 6:58 PM No comments:


My mother lived with her mom, Grandma Ross, who was not a happy person, a classic "you kids get off this lawn" kind of grandma. At any rate, dad would come and pick me up, rescuing me from the boringness and stringent rules of grandmas house and take me on drives around LA. We had our favorite places; Breyers Ice Cream shop in Westwood, The Farmers Market on Fairfax, Pony rides at Griffith Park, La Brea Tar Pits, Hamburger Hamlet, Venice Beach and the pier at Santa Monica.


The cool thing about hanging out with my dad was he was born (1923) and raised in LA and he really knew his way around the old side streets, and he had stories. He'd tell me about the time the freeway was built  in Pasadena and how before that there were these railways that would take you all around the city from Pasadena to Venice Beach (that was the Red Line Railway). He showed me an old building in Santa Monica where there were dances and he saw the young Frank Sinatra lead a band. He walked me by the Venice Beach Canals and talked about his family renting a house there for  summer months. He showed me the movie house where he'd go on saturdays as a kid to see triple and quadruple features with his older brother, who would buy his ticket and leave him there as a a cover so that their mom wouldn't know Uncle Dick was gettin' drunk and carousing around.


I've always felt like my own physical time in Los Angeles extended beyond my own experience, because my dad was so good at imparting his own history to me. Lately, my ten year old son, and I have been spending some time in some of these same old haunts. Like the carousel at the pier. I have become my dad and Alexander is me, it's my time to tell him the stories.
Posted by Unknown at 10:49 PM No comments: 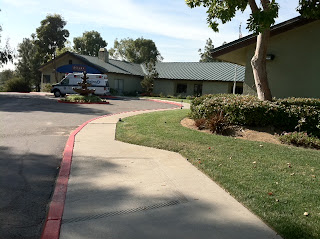 Today was a "care meeting for Paul Williams" at the nursing home he's been living in for the past two and a half years. I've been pretty upset about Paul losing his front and side teeth (could be three now) these past few weeks and I prepared myself in advance, so I wouldn't lose it (ie become the raging relative) in the meeting.

The reason he's lost his teeth is completely down to lack of care by the nursing home, they haven't been brushing his teeth and he doesn't remember how to take care of himself anymore. Actually he will brush and spit when given the tools but you gotta stand there with him and direct the show.

Anyways I bought a box of See's candies and took it to the meeting, a reminder to myself to keep it light even while getting into the facts and sorting out what we need to do. I found out the dentist is coming tomorrow and MediCal/Medicaid will pay for dentistry, so let's see how far they will go.

Will they replace the missing teeth? I doubt it. At the very least they can do something, I hope, to stave off the oncoming gum disease.

Poor Paul. I stood by him while he brushed his teeth and flossed today, the bleeding gums...sad. But the good news is the chocolate's worked their evil charms and me and the staff had a reasonable meeting.

Garage Orchestra was released in the spring of 1994 on an independent record company catering to the rising tide of 90s grunge bands. I don't know what this little record was doing there, one wallet chained/ buzz haircut/three quarter length short-pants employee said to me, "I heard your album Cindy Lee and it sounds like a cross between christmas music and tunes for a commercial". Luckily, I took it as a compliment.
And fortunately a few well heeled music outlets shed some positive ink about it that year, like Rolling Stone:
"(****)Squealing and swooping, Cindy Lee Berryhill's voice is a natural gas. Even more wondrous is the San Diego guitarist's arranging. To songs whose raw, free ecstasies recall Patti Smith, Berryhill adds strings-and-timpani flourishes that echo Brian Wilson. By turns quirky and tender in their lyrics, "Radio Astronomy", Every Someone Tonight", and "Scariest Thing In The World" conjure up a visionary, whimsical universe. Ace players like cellist Renata Bratt and percussionist Randy Hoffman flesh out eccentric tunes whose charm exerts fresh fascination and an odd, gripping luminosity."
..And, Record Collector (UK):
"Sometimes you imagine a sound in your head, and there doesn't seem to be any music in the world that can satisfy it. You can dream up your own menu, but mine demanded the Beach Boys' harmonies and Brian Wilson's idiosyncratic melodies coupled with a Dylanesque lyrical vision and the poetic passion of Patti Smith. If the result could somehow be witty, romantic and half-crazy as well, so much the better. Somebody else had the same dream, and the ability and daring to pull it off. Cindy Lee Berryhill's 'Garage Orchestra' from 1994 was the result, the third in an occasional series of visionary albums from the Californian singer-songwriter."
-Peter Doggett(1996)
At any rate, the commercial-christmasy music sounds of the G.O. are back in print via iTunes, TuneCore and other music outlets....
Posted by Unknown at 9:45 PM 2 comments:

Alexander got a mandolin recently and is just learning a few chords. We took it into his dads nursing home so he could show him how he's learned the G,C and D chords. He's playing them over a traditional song called Two Soldiers, performed by David Grisman and Jerry Garcia (you can almost hear them singing from Alexander's iPod).
I'm gonna be honest, it's getting harder to go in for visits. Emotionally, that is. This is a thing where Paul's never gonna get better. And that is a hard fact to face.
Today was especially hard, I noticed Paul had a tooth missing. An incisor, in the front and to the side, so not hard to miss. It broke me up. Last few times I've been in there I've helped him brush his teeth. All you have to do is give him a tooth brush with paste and let him spit into a bowl and rinse and spit, and then floss. But no one is giving him the brush and so he is falling apart.
This is hard stuff. We stayed for a while, I trimmed his fingernails, but I could hardly look at him without wanting to cry about that tooth. Like a little piece of history gone. And the nurses didn't even notice it was gone.
Alexander's ten now, he lost a tooth a week ago. He went to the dentist for the first time and had a glowing report, but a baby tooth had to come out. Then the tooth fairy came that night (geez 3 dollars!)...it's all about teeth. Some come and some go.
So I talked to the nurses at the home, and they will have a dentist come out. What can I say. Nothing will put the tooth back in and make Paul all better. Sometimes you just gotta accept what is, come rain or come shine.
I have a Care Meeting with the nursing home in a few weeks. I got to get my head on straight for this one, dentistry matters especially with someone that's not about to die in a year or so, he's 63 and gonna be here for a long while I suspect.
Sometimes it's about the feelings and there's no getting around that.
Posted by Unknown at 8:17 PM 2 comments: