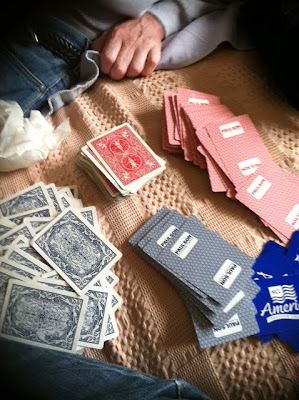 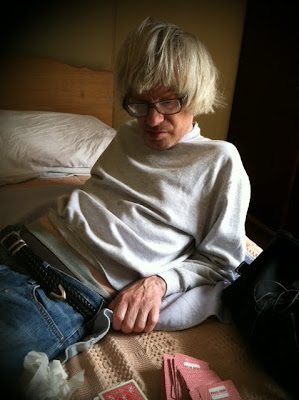 Lately It's been hard to collect my thoughts and put them into a reasonable form. They've been running like wild ponies to the four directions. But I will make an attempt to type a few words today...
I've thought a lot about Paul lately, and the kind of life he lives at the nursing home. The bad food for one. I try to bring him a bagel and lox once a week.
He isn't fairing so well these days. I got a call from his doctor on Sunday (that's right Sunday...) and he wanted to talk to me about Paul's deteriorating mental health. He recommended anti-depressants (who wouldn't be unhappy living in a sterile Medi-caid run nursing home..?) I explained to his doc that we'd been through 5 or 6 different antidepressants several years ago and they all only managed to make him sleep more (up to 15 hours a day) and then get crazy when he tried to cut back (like when he bit his 2 year old son's arm). The doc agreed that might not be the way to go.
He suggested a visit to a psychiatrist. But you actually need to be able to converse, even minimally, with a psychiatrist in order for him to see what your needs are and then administer medicine based on what you've revealed about yourself. Paul rarely talks anymore. He'll answers a few questions in one word answers. The doctor pretty much agreed.
And then Paul's doctor told me, short of the antidepressants or psychiatrist, Paul could use more family visits. "Can some other family or friends come visit him more often". I told him it was all pretty much me, with the exception of an occasional visit from a family member that lives far away. He'd had a few regular visitors over the past 2 years but Paul didn't want to get out of bed for them.
That's when I realized that Paul's well being was based on whether I was visiting him (and his 9 year old son Alexander). He might live or die (you see he's not wanting to get out of bed anymore) based on whether this person, ie me, is able to see him more often.
So it poses the question...does one life go on hold for another?
In the past two years, since my husband was entered into a skilled nursing facility, I've slowly come out of a time I can call, care-givers burnout. When Paul lived at home, our son and I couldn't venture out, it had become too hard to take Paul anywhere. I payed for a sitter to stay with Paul while I was at work or went out to a movie. It was a very expensive time and we lived on a short leash.
Since then I've discovered I love to run. I run about 3 miles 4 or 5 times a week. It's a blast! I can go on short trips to other cities to visit friends or play some shows now. I can take our son to the movies or do something wild and go star gazing with an astronomy club. I can join up with a running club and meet new friends. It's like becoming a young adult again for the first time, where you don't have to ask your parents and borrow their car. Alexander and I can do stuff.
So I might have sounded like a right ol' asshole to Paul's doctor but I told him, "What I'm doing is the best I can do, visiting him once or twice a week. And it all falls on me, so this is what it looks like. It's just a sad situation. But let's make the best of it. "
And anyways, I won't go back to that place of living half a life. And i definitely don't believe Paul would want me to. Paul was always on the side of living wasn't he....
Let the wild ponies run free.
Posted by Unknown at 8:25 PM