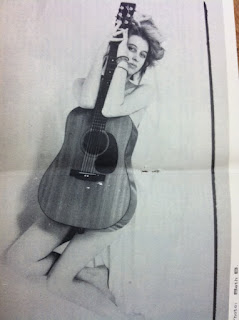 photo by beth b

(Been browsing through some old stuff; photos/articles and came across this one. Everyone had their shot at being Anti-Folk Hunk: Lach, Roger Manning, John S Hall, Billy Syndrome...etc. it was a goof. We were just innocently, trying to put sex back into folk music where it belonged.)

The magazine was ready to go to press, Cindy Lee had done her Folk-Hunk shoot and even though we were both exhausted, we sat down to gab. Cindy Lee with her agile, Gemini mind kept me on my toes- this may be girl-talk but this lady, who may appear to be the quintessential California girl-aint no bimbo. Extremely well informed, Cindy Lee is a voracious reader (currently digging into Biblical and Sumerian texts) and generally we have been known to get into some pretty heavy subjects, but not this time. Even clever girls are allowed to get silly sometimes...

X: How does it feel to be Folk Hunk of the month?
CLB: I still feel like the same person that I always was-- I do feel a little freer now that I've rid myself of clothes.
X: And you are gonna play our party next week at the Pyramid Club (in NY) with your new band. And what was it like for you to work with Lenny Kaye? (Lenny has produced Cindy Lee's second LP for Rhino Records, "Naked Movie Star")
CLB: It was very cool. It was really neat hearing the Patti (Smith) stories. He is a rock-god y' know. Lach and I met him at the Cat Club, a benefit for the writers of the Village Voice, and the three of us were all goofin on folk music and speculating about the demise of New York's rock/club scene.
X: Does the scene seem changed to you, now that you are back here in NY with Kirk and he and Roger (Manning) have records out and Michelle (Shocked) has been nominated for a Grammy?
CLB: It doesn't feel like people have changed at all, I don't sense that, in a way I feel that people are not as anxious as they were a year ago--what with a whole lot of us getting records out. It feels like our energy is now able to be a little more directed.
X: When will your record be released?
CLB: Mid April
X: And it's a big change from your last record.
CLB: Definitely. Putting together a rock god producer, a story teller songwriter, a jazz band and a kooky reissue record company. I'm being groomed to be the next Roy Orbison.
X: Presumably they will spend some of the money they make off of his catalogue on you.
CLB: No I'm sure that money is going into stocks. I'm still living off the Rhino/Monkee's money
X: And do you have a message here for your mom?
CLB: I had a girl photographer..