The Pleasure of Ruins 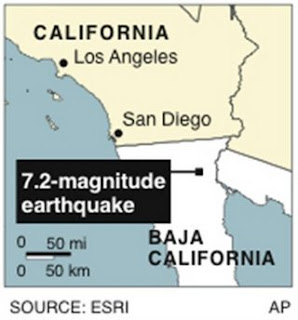 Earthquake update: I was at a kids/parents Easter party today at 3:40 here in Encinitas. We'd played 2 hours of super-soft ball (with a tennis ball) and we were setting up dinner at a friends home. I was in the bathroom washing my hands when a feeling of vertigo came over me and I thought, 'wow, I'm woozy, low blood sugar, better get something to eat soon' then it occurred to me that it was a rolling earthquake. It lasted almost a minute and felt like I was on a boat on rocking seas. The sensation was very much like an inner ear infection I endured in 1999 where I had a sustained sense of vertigo and always felt like I was on a gently moving boat. The kids were playing Foosball and none of them felt a thing. Young Jake said he knew something was amiss when he saw the kitchen chandelier swinging.
When I came out of the bathroom I expected a lot of excited talk but it took a few minutes for the other parents to realize what had just happened, everyone looked a little disoriented. The pool water was still sloshing about. Then we had dinner checked the news and saw that it had actually been quite a big quake, 7.2 just south of Mexicali.
I grew up in Southern California and my first awareness of earthquake action wasn't the quake itself, rather its after effects. I must have been about 3 or 4 years old when my parents took me on a drive to view the damage to a dam in the Silver Lake district. It had a big crack in it and the water was gone. I remember hearing the news reports of flooding on the big boulevards. We drove around the lake singing "One little fishy and a mama fishy too....and they swam and they swam all over the dam.." The idea of a big cement thing like a lake breaking was a stunning visual realization at age 3.
Perhaps that dam bursting was the beginning of my fascination with cataclysms. By age ten I was playing guitar and writing my first song, Cretaceous Times, an ode to the demise of the dinosaurs. Twelve verses and a one line refrain..."So had come an end to Cretaceous Times"...which outlined the three or four popular theories on why the dinosaurs went extinct so quickly. I had made a dinosaur file in my desk which summed up the variety of fossils found and sound bites on the Triassic, Jurassic and Cretaceous periods.
It kept my mind off of things at home, reading about far away time periods and cataclysmic events beyond my control. In some ways those times were more under my control then my own life, I could read for as long as I liked and then put the book down and be done. This I could control.
After I'd satiated my interest in dinosaurs I found archaeological sites to be a new passion. My favorite sites of destruction were Pompeii, Easter Island and Troy. Like visiting the broken Los Angeles dam of my youth, I got a jolt of electricity from reading about ancient ruins, cities and societies of people that once existed and no longer were.
Then I wrote my second song, Pompeii, which became a family hit. Much later, In the mid 90s I opened a Largo show for the wonderful producer/entertainer Jon Brion and he asked me to join him during his set and play my first song. I played Pompeii and the audience went nuts. It was still a hit.
When I was eight years old my mother died in October, just before Halloween. I remember the time period well because my dad bought me a shopping bag full of ghosts, witches and ghouls to hang around grandma's house in Laguna Beach. Two significant things came to my attention just prior to her death one of them was a program on Dr. Leaky and the work he was doing in the Oldivai Gourge with the excavation of the newly discovered Australopiticus skull. And a program about Stone Henge.
A few months after my mother died dad picked me up from Grandma's house and drove me home: past Los Angeles ( Griffith Park pony rides), past the Tar Pits, over the Ridge Route (Techachipi Mountains), through Bakersfield and into Delano, I had a revelation of sorts. I decided that my mother had been an archaeologist working at an important ancient American Indian site and had contracted Valley Fever (sometimes called San Joaquin Fever) a fungal disease that can live dormant in the dust for years, and died a noble death in the line of work, while digging up ancient artifacts. I read * recently that this kind of myth making is common in children that lose a parent.
My mother wasn't an archaeologist, I came to understand, but I loved ruins just the same. There's something lovely, serene and sad and compelling about them all at once. So long as they stay 'long ago and far away' and disappear when you put the book down.
*The Loss That Is Forever: The Lifelong Impact of the Early Death of a Mother or Father by Maxine Harris, Ph.D.
Posted by Unknown at 7:06 PM