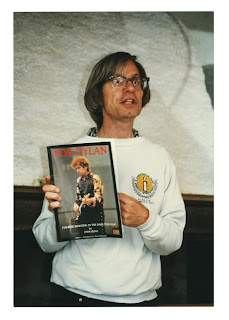 For many years as a writer Paul loved hearing from his readers, he still has overflowing files of both email and traditional mail. The interesting thing is that the fan letters addressed all of his writing subjects equally. The Das Energi readers would feel like he'd changed their lives with his practical philosophy. The Bob Dylan Performing Artist readers felt like his series had more minute details of Dylan's artistry. The Philip K Dick fans knew Paul had been Phil's friend and, after his death, the estate's literary executor and no one knew as much as Paul did about what was "in the vault". Paul also had fans of his general writing on rock and roll some of them became regular correspondents and friends and Paul would mentor them-encouraging them to write for the newer 1990s CRAWDADDY!
It always drew a great feeling of wonder out of me watching him juggle these various writings and careers. When he had his brain injury in 1995 his brain surgeon asked me what kind of work Paul had done, I told him about all the varieties of activities he did each day and the doctor said, " He won't be juggling these careers anymore, but because of his intelligence he could probably handle losing a few brain cells better than the next guy." Paul was able to juggle pretty well after all.
A month after he came out of the hospital and he was still in out-patient rehab Paul was offered a job as music editor for a new high fidelity glossy zine out of the bay area. As I recall I answered the first call to the publisher and told him about Paul's recent injury. He asked Paul to call him and he offered him the job and that was that. Paul held the position for almost a year and it paid well. For the first time we were able to afford to buy a few things. We got a video monitor to play video's but not a TV, Paul paid a friends wife to set up his new computer and get his books for sale on line, we bought a Cannon camera, and we went to Europe. Within a year he was fired from the magazine.
Only five months since his injury and we were flying to Frankfurt and attending its annual book convention and Paul doing a full fledged lecture tour on Dylan and the Rolling Thunder shows. It was nuts. But it worked and he did an amazing job as a speaker.
I somehow knew that if Paul could get back into his way of life quickly he wouldn't have time to ruminate on what had happened to his brain. And getting the attention for his writing, via a lecture tour, gave him some positive strokes. And in Europe he had full houses of listeners, fans of his words and ideas.
* * *
It used to be visitations from fans and distant friends were a positive reinforcement for Paul and reminded him of his relevance as an author, business partner and friend. Now, he has forgotten not so much who he is but what made him feel satisfied, after the writing was done. The friendships and new adventures, the discussions and disagreements, the flirtations and the admirers.
Now, as his caregiver, I 'm at a crossroads. This past month he has had a bevy of visitors. Very suddenly for some reason. All very lovely people. And they've wanted to visit their friend, family member or the Great Man. And I've watched him carefully to see how to handle these requests in the future.
What I've observed is that he is having difficulty remembering friends he made in the past seven years or folks he only marginally knew. For instance, he doesn't remember becoming a member of our local UCC church. He doesn't remember the family we befriended and have traded child care with on a weekly basis since 2003. He knows he knows them somehow, but doesn't remember the how.
He does remember his family. His two grown sons Taiyo and Kenta who both came to visit him this month, and was very happy to see them. He remembers most of his history, when I ask him pointed questions about CRAWDADDY! , but doesn't remember enough to help a Dylanologist who came to ask Paul a few questions for his own Dylan book.
I can see now that some of these folks confound Paul's memory of himself. He wonders out loud are they related to him or how does he know them, though he'd agreed to see them ahead of time. So for this reason, with the exception of long time friends and family I'm telling Paul's fans that he is not up for the visit.
So much of what Paul wanted to say to everyone is in his books, almost 30 to choose from. And as he once said to me, "I am writing these words for my future readers. When I write I can feel their presence". And I believed him to be telling the truth.
Posted by Unknown at 8:39 PM