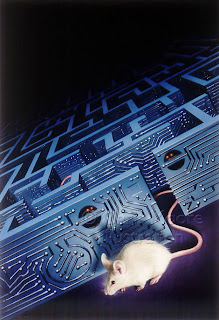 Paul's new glasses came in today. I'll take a picture this weekend and put it up. I was too tired and hungry after work to go over to the nursing home and put them on him, plus I'm going to need to put his name or his initials on the arms so they lose any potential "resale" value.

Do you ever wonder why it is that some aspect of your life turned out to be like a significant book you read as an adolescent? That would be Flowers For Algernon (Daniel Keyes) in my case.

In short, the story is told from the perspective of a man who had been born mentally disabled and undergoes an experimental surgery which increases his intelligence. Through his journal entries you follow along with his increased abilities and eventually his slow deterioration back into his disability.

When I was in the eighth grade we had to read the short story, it was in our text book and I was stunned that something so good could be in a school book. (Apparently it won the Hugo Award for best science fiction story in 1960) I bought the full length novel and dove in. Originally published in 1966 it became a joint Nebula Award winner for best novel. But I wouldn't have known or cared about that stuff then.

It was the 70s and I had arrived at the age where the first child of the family adventures out on their own into new and unknown radio territories. I must admit, though I loved music, I was very naive and unhip about what was going on in the world of pop. But I found a new station with the whirl of a dial that I dug deeply, and it became the soundtrack to Flowers For Algernon.

Here's a list of some of the songs I fell in love with: Eighteen With A Bullet, Me and Mrs. Jones, Using Me ('til You Use Me Up), Ben (especially poignant since it was about a rat and Algernon was a mouse), Shaft, What's Goin' On, Backstabbers....

The other station I listened to occasionally and when I wasn't reading the book had a few good songs but some dumb ones too. I liked The Needle And The Damage Done even though it was a scary song about drugs and I hated a song about a guy named Guitarzan. There was also a lady that sang about how terrible it was going to be to turn 17 (Janis Ian), dang it was depressing.

So I stuck to my new found radio station. I didn't realize at the time that it was for young black urbanites. For me these new songs were the sound track to this grand novel I'd discovered.

The parallel: When Paul had his bike accident way back in 1995 I was with him through all of the various forms of rehab. Even then I thought occasionally of the book parallel. Paul's doctors said his recovery from such a devastating brain injury was miraculous.

I watched Paul go from his early days in rehab, answering simple questions about the date and the president to his later rehab days having intellectual conversations with the cognitive therapist, her saying to me "There's no reason for him to be here".

Then in the past 6 years the slow, unstoppable descent into dementia. Flowers For Algernon the book had been my white mouse, doing a dry run before the real thing.

I don't see it all as a complete loss. We had eight years together after his injury where he lived a normal life as a writer, lover and father. Or as a simple tragedy. Even the character Charly knew he had done something very important for humanity, even in his final days of blissful naivete.

Paul enjoys looking at his books now and sometimes reads passages from them. Last year I asked him if he missed writing, he gave it careful thought and answered flatly, "no". And I could see he was alright with that.

He wrote more than 30 books. His words and perspective live on through them.