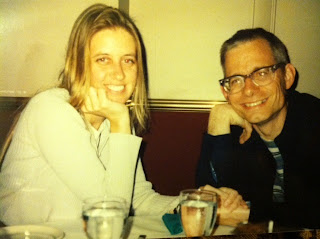 This is me and Paul 2 1/2 months after his bicycle accident/brain injury (April 15, 1995)...at the American Bookseller Assoc. convention. The doctors and nurses and therapists who were working with Paul had asked him not to go the the convention, it was in Chicago, they wanted more time for his brain to heal. But there was no talking him out of it so I went along and made sure he stayed safe.

You're wondering what I mean by 'safe'? It was just a month earlier he had come home from the hospital and on that day he went raging, out of the apartment and down the street because his mother had told him the chicken wasn't finished cooking yet. One minute he seemed perfectly normal, the next he was yelling at me he wanted a divorce...fine, except we weren't married. Or, he was waking up early in the morning, getting out of bed and peeing in a cardboard box in his office. Or, he was crying profusely over a passage in the children's film, James and the Giant Peach. It was a challenging adventure to be sure.

We'd done a bunch of shows with the Smithereens, one of the shows had a new band opening before us, Weezer. The guys in Weezer were super cool and we all hung out behind the theater together after the show, discussing how much we liked each others music. We'd gone out as a 3 piece, me on guitar, Chris on bass and Randy playing timpani/vibraphone/percussion...

Anyways, when April 15, 1995 happened....I was in a bit of a funk. So many friends and fans were so enthusiastic about Garage Orchestra (released 4/94) and I'd gotten some great reviews, but nothing was moving my life closer to easy. It was tax day. I was driving home from a rehearsal with Randy and Chris and had a feeling of being hungry, and I thought to myself I'm not gonna stop to eat because I want to grab something with Paul, so I waited and I hightailed it home. I came in the apartment and no one was home, so I fell down on the bed and stared at the ceiling. Next minute our neighbor was banging on the door and shouting for me to follow her...the accident had happened a block from our place, on a big hill going down to the beach on 3rd street. But I've written of this before...

Long story short: Once Paul was out of the hospital, out of inpatient rehab, out of outpatient rehab ...our lives were supposed to be normal again. Wrong. Bringing your loved one home after a brain injury is kinda like bringing a feral animal home, one that loves you, but is none the less, feral.

That first month he was home I wrote the song Unknown Master Painter. I must admit, I had the overwhelming feeling that I wanted to get in the car and drive it as far east as I could go. I wanted to escape, at the same time I knew I wouldn't. A few family members, Paul's family, were calling and inviting me to leave him. One said, "You're too young to have to live a life like this. You should leave now and let yourself have a life. He may never be the same again"

I didn't listen. In fact, I didn't understand what she was talking about at all. How does one leave someone that they love? Especially in their darkest hour. Plus, I was still too in love with Paul. You see we'd only just moved in together the year before. It was still in the intoxicating phase. But now, maybe with a big shot of Haldol mixed in. And then, there was that ever-present desire one has to want to fix it and make it all better, however impossible and delirious that fixing may be.

It was hard. My musicians were supportive and understanding and we fit in rehearsals when we could. The accident certainly set us back and I was left without any feeling of where the creative process was going, and then quite suddenly the cellist Renata had to move away to the east coast. So it became an issue of timing.

Somewhere in there I had a conversation with Paul about what the album should be and he brought up the idea of a Fire Sale, that is getting rid of all the songs I'd had in my arsenal, and hadn't released. And so that became the spirit of the album.

We recorded it in the fall of 1995, about 6 months after Paul's accident. Thinking back I don't know how I pulled it off at that time. It seems astounding now, considering what I was going through with Paul's recovery. And his insistence in getting back, quickly into his regular life pace. So we went to Europe so he could do a lecture tour, and he took a job as a music editor of a HiFi magazine, and I made an album and I watched over Paul's progress and his care.

This is the fire that brought forth Straight Outta Marysville. And it is back in print now, as of today in a digital only format..at iTunes and the like. I heard some of it today for the first time in over 12 years and it is an odd album, full of peculiar characters and plenty of youthful anxiety and some beautiful if minimalist orchestrations...Lenny Kaye once said to me that recordings are photographs, Marysville is then a photo album of my 1995 with a few amazing musical friends.