THEY DIDN'T TELL ME THINGS COULD GET WORSE

The following is a selection from the talk I gave at the conference for the Calif. Brain Injury Association May 15th 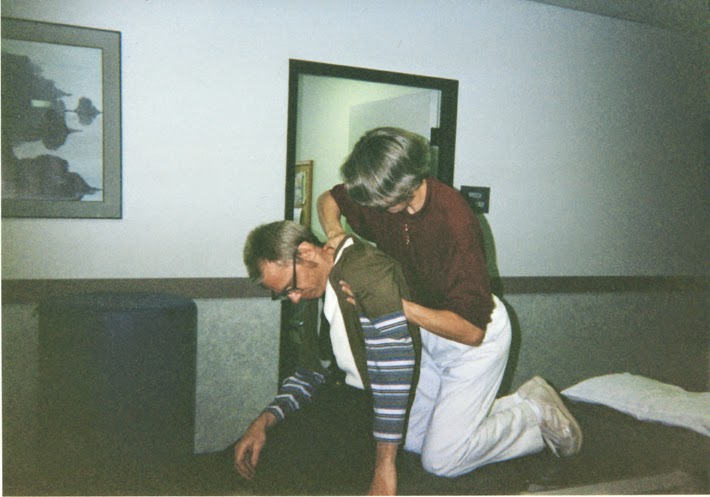 We had a baby in 2001, Paul turned in his latest book on the work of Bob Dylan and began writing on a new book ... Around this time he began to have anxiety attacks and sometimes he felt the room spinning in a vertigo kind of way. He began to walk slower and sometimes he would talk a little bit slower. It was not very noticeable at first. I thought, it could be he feels like me, I'm tired all the time from taking care of our new baby.

Some folks that acquire a brain injury or multiple concussions can later begin to show signs of a new problem. For Paul, just as he was improving on all fronts he began to have severe anxiety attacks and off days. Sometimes he would say to me "my brain feels really fuzzy today" or "I'll drink coffee to get out of this fuzzy-brain feeling". In retrospect, I believe, it was the beginning of early onset of dementia due to his traumatic brain injury.

Things have changed much now that multiple football players have donated their injured brains to science and there has been a paradigm shift in understanding, it's common knowledge now, that tbi can sometimes lead to dementia or Parkinson's. Just last year, 2013, while at a talk by a scientist, Yimin Zou, on brain and spinal cord research I got my answer as to what happened to Paul’s brain: The initial break in the neurotransmitter highways is called a traumatic brain injury, but the subsequent retraction of the microfibers called Axons, worsens the ability of electrical impulses to get around the brain.

Paul tried numerous anti-depressants, some drug for Parkinson's, some other drugs like Neuronton that are supposed to stimulate the brain. Nothing helped. As time went by, over a period of about 2 years, he became less steady on his feet, talked much less, couldn't remember where we had stopped reading in the book we were reading aloud together. But the biggest difference in him was he began to write less and his office became strewn with papers and unfinished bits of things and with many unopened letters and unpaid bills....

GETTING AHOLD OF THE FINANCES:

I am grateful that a friend had told me years earlier that if I was going to get Paul on social security disability that I would need an attorney. He was right, even the attorney's request was turned down by social security the first time through. The next time he was accepted.

Another good thing that worked in our favor was we’d filed for bankruptcy before Paul’s dementia set in. I’m relatively certain now that Paul knew something was not right with him back in 2002 and he pushed me on the idea of us going into bankruptcy. He had a huge debt, nearly $50,000. I had been unaware of. As it turned out, many of the years after the brain injury he had not been making as much money as he had before, and so began using the credit card for basic living expenses. I'm thankful this problem came to light while he could still fill out forms and make decisions. It was, I believe now, a gift from Paul while he still thinking clearly.

I was not one of those women that naturally takes ahold of the family budget and financial responsibilities, I'm a musician after all, so when it became clear that Paul was not capable of paying and keeping track of our bills, I lurched out of denial kicking and screaming. Fortunately Paul had been an extremely organized record keeper up until the point where he no longer could. Now most our bills and his writings and mail were scattered on the office floor.
*
I wish I had seen the dementia coming so I could have cut off the credit cards earlier, the PayPal accounts, limited his time on the internet, because he was signing up for things on line that cost thousands of dollars or getting scammed in all numbers of ways. Including by telephone. I had to undo a number of these and it wasn’t easy.

Coming out of denial, that something was going wrong with Paul's brain, was hard for me. But bigger problems started to arise. He had a car accident with our 2 year old on board, rear ending another vehicle that was stopped at a red light, Paul’s fault. And then a month later he bit our 2 year olds arm trying to get the boy to stop interrupting him while working on the taxes.