Paul starts CRAWDADDY! Magazine January 1966 out of his dorm at Swarthmore College. But by the fourth copy he has dropped out of college, moved back to Boston and gotten a little bit of funding from his grandfather Phil Williams, who wanted to support his grandson's burgeoning business. We pick up the story from there... 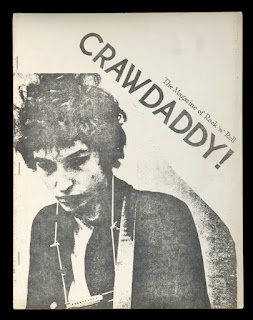 15. Paul sez “Jon Landau, certainly one of the best and most influential critics of the rock era, debuted as a rock writer in the fifth issue of CRAWDADDY!, September 1966. Paul now back in Boston was going to Club 47 three nights a week and hunting down rock and roll shows where ever he could,the rest of the week. Flipping for bands like The Animals’ two hour show at Rindge Tech, The Rolling Stones at Boston Garden and Lynn Football Stadium, The Beatles at Suffolk Down “plainly audible, beautiful to look at, and confirmation that we—and I—existed as a special body of people who understood the power and the glory of rock ‘n’ roll.”

Jon Landau: "during those few short years we changed each other's lives--he certainly changed mine more than the other way around.  From the day he walked into the old Briggs and Briggs Records and Instruments store in Harvard Square, where I was a high school student with a summer job behind the counter, we started talking and talking and talking about music, music, nothing but music.  He was trying to get the store to carry the first issue of Crawdaddy! and I convinced my boss to let him put it by the register. When he came back the following week, I had read it and I volunteered.  With my classic teenage arrogance, I announced that I could do better than any of the writers in that issue, including him.  He responded,  'Ok, Mr. Bigmouth, give it a try'  Which is how I came to be a rock critic."

16. Between the fifth and sixth issues Paul took a 2,200 miles “mostly business trip”, hitchhiking from Boston to New York, Cleveland to Chicago, and Wisconsin and back. In Chicago on a blues fan’s pilgrimage Paul stopped at Chess Records’ recording studios which resulted in a full page ad in CRAWDADDY! and an assignment to write the liner notes for new albums (each called More Real Folk Blues) for artists like Howlin’ Wolf, Muddy Waters, and Sonny Boy Williamson. When Paul gets back to Boston a local magazine distributor has ordered 2,000 copies of the sixth issue, which now has a print run of 2,800 copies (up from 1,500 copies of the previous issue).

17. The Sixth Issue of CRAWDADDY! was published Oct 20, 1966 (the first issue of Rolling Stone debuted November 1967), in a print run of 2,800 copies, up from 1,500 copies of the previous issue. Paul writes, “….sales of the fifth issue had been good enough to attract the interest of a local magazine distributor who ordered 2,000 copies of the sixth issue. Tim Jurgens, a young subscriber from San Francisco moved to Boston to help out as an editorial assistant. Paul wrote, “ I don’t think I could have made it through the next few months of the magazine’s progress and rapid growth without Tim Jurgen’s friendship and hard-working support”.

18. In mid November CRAWDADDY! moved to New York City. Paul writes in The Crawdaddy Book (Hal Leonard), “The new office was a big second-floor room overlooking Greenwich Village (I used to spend a lot of time sitting on the ledge of a large open window with headphones on, watching the endless parade of people walking across Sixth Avenue and Third Street)." The room had previously been a guitar shop called Fretted Instruments, and the walls “were pleasantly lined with natural-looking pine planks installed by the former tenant”. “All of us (additional staff persons came along soon) did much of our work on a huge table in the center of the office. There was a small back room with no windows (halfway up the stairs from the street) where Tim Jurgens (the assistant editor, also from Boston) and I slept,” Paul writes in the Crawdaddy Book. An article was written in the Village Voice of CRAWDADDY’s arrival, it was just the beginning of a lot of press attention. 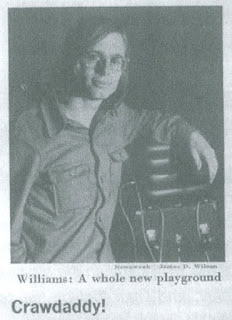 19. Ralph Gleason from the San Francisco Chronicle wrote on January 1967, “The most interesting publication in the U.S. covering the rock scene is a magazine called Crawdaddy….it is devoted with religious fervor to the rock scene.” 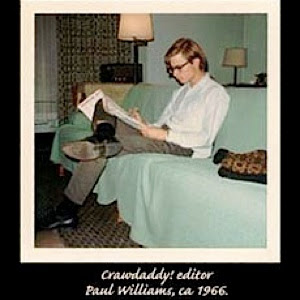 20. The seventh issue of CRAWDADDY! came off the press the first week of December ’66. There weren’t many ads yet but there was a new look. The typeface inside had changed, Paul was now leasing an IBM “Executive” typewriter, the resulting page looking more like other magazines of that era, “Instead of looking like a letter from a friend typed on an ordinary typewriter”, writes Paul.
The seventh issue is notable in hindsight for its opening sentences raving about the Doors (“the best new band I’ve seen this year...”)—the first mention of the Doors in a national publication. Paul had been given an acetate of the Door’s forthcoming album after he watched them make a promo film at the Elecktra office for their first single, Break On Through to the Other Side”. Paul had befriended their producer Paul Rothchild, at a Loving Spoonful show back in Cambridge at Club 47.
The list of writers that wrote for CRAWDADDY! expanded. Paul said, “Crawdaddy! didn’t have any money to pay its writers, so writers wrote for us mostly as a way of communicating their enthusiasm for, the music they loved”. Sandy Pearlman and Richard Meltzer both came from Stony Brook, Long Island, Peter Guralnick and Jon Landau from Boston, David Hartwell was a childhood friend from the world of science fiction, an illustrious list of writers, rock producer/managers and editors that would all make their mark in the world of popular culture.
In the Crawdaddy Book, Paul writes:
“Before we finished putting the next issue together, I made my first ever visit to California (thanks to a mid-sixties phenomenon called Youth Fare, which provided half-price airfare to those under twenty six). In LA I met the Buffalo Springfield and saw them do a great show at the Whiskey A Go-Go, and I spent a few days with Brian Wilson of the Beach Boys and attended a recording session for the never-finished SMiLe album. In San Francisco I was very impressed by Big Brother and the Holding Company at the Arc in Sausalito, and Moby Grape at the Avalon Ballroom, and Jefferson Airplane and the Grateful Dead New Year’s Eve at the Fillmore. It was a good time to be a young music lover.”

In December Paul spent several days as a guest at Brian Wilson’s home in the Hollywood Hills. It was during the wildly creative Smile era and Paul stayed in Brian’s tent, which was in a sand box in his living room, next to the piano. The first time Paul smoked pot was with Brian in this oriental style tent. Brian played Paul the early acetates of Heroes and Villains and some of the other SMILE songs, which were never officially released. One day Paul spent time with Brian and the Beach Boys at the studio and remembered singing odd sounds and noises on one track (probably “Barnyard”-ed). And Paul was witness to this moment: “I was visiting a Beach Boys recording session in Dec. 1966 when Carl Wilson walked in with a record he’d just bought, something he’d fallen in love with during the group’s recent trip to England (Gimme Some Lovin’ by the Spencer Davis Group). He put it on a turntable eager to hear it--stopped after a minute and tried again--then grabbed the record and broke it over his knee in fury. He’d just discovered that the American record company had remixed the song in an attempt to make it more appealing to the U.S. market.”