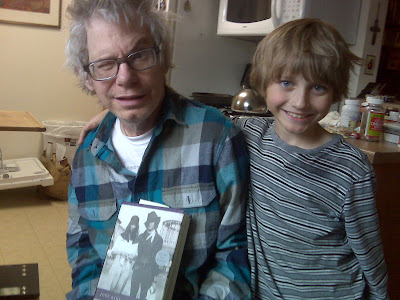 Paul and Alexander Williams, Oct. 24,2010. This was the first of the three photos. I showed Paul the book I picked up a few weeks ago near Harvard: Patti Smith's Just Kids, and I'd bookmarked the page where she mentions her admiration for Paul and Crawdaddy magazine. He was very interested to read what she said and continued reading a few pages after. He rarely reads nowadays so it was nice to see him enjoying a book. 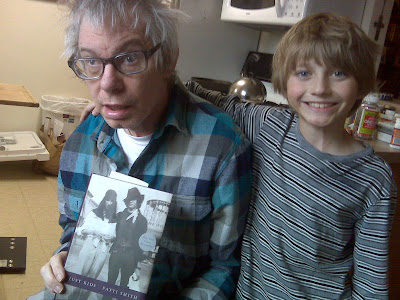 Paul often has one eye shut. The doc's never did figure out just why that is, speculating that it is a tic, like the bending over he does every minute or so. I asked Paul to open both eyes for this photo and you can see how hard it is for him to do. He really concentrated to make himself do it. I think whatever is going wrong in his brain is affecting his eyesight. Clearly you can see in this photo, he has a sort of 'wandering eye' gaze now. Something he never demonstrated until the last few years.

This one was the best of the three
photos Alexander and Paul look at ease with one another and Paul is relieved that he can close his right eye again. Alexander has a very minimal relationship with his dad, even before Paul was moved into the nursing home, but he does like seeing his dad smile. And Alexander consistently makes Paul smile.
Posted by Unknown at 10:06 PM