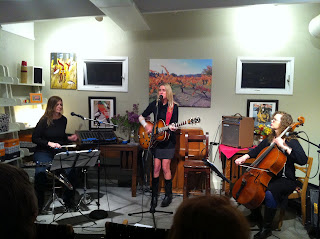 (photo Cece Hugo)
Here we are at the Sonoma show, which was hosted by Hwy 12 Properties and Sonoma Dog Camp. We had a great time, with great sound and played about an hour and a half. The sound was so good I wanted to keep playing but finally I did have to try the fine Sonoma wine. A guy in the audience turned out to be an old acquaintance of Paul's and it was weird thinking I'd have to break the bad news to him about Paul's health. As it turned out he'd pretty much heard it already through the grapevine. 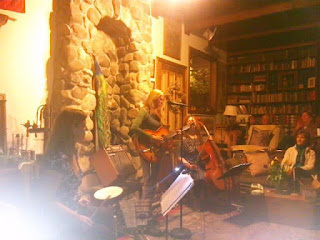 (photo Fayd Ogolon)
We had a few hours to kill before our show in Saratoga so we went to the fabulous Fleur de Coco in Los Gatos and had the most marvelous cup of cocoa imaginable, it was as Renata said "liquid candy bar".
The show was on an unusual site, a property owned by Mr and Mrs. Peck, an elderly couple that watched the concert from the 'balcony', a raised room to our left. They were quite lovely. Mrs. Peck gave us a thank you and very stately bow. It was like we were performing for the old Duke and Duchess of Silicon Valley. Their property had a narrow gauge train track, a historic 'ampitheater', and housed several homes, all old wood and stone structures. This one had so much odd ball stuff in it, (a skeleton, a stuffed peacock, a live chinchilla for example) you could have had an amazing game of I Spy. 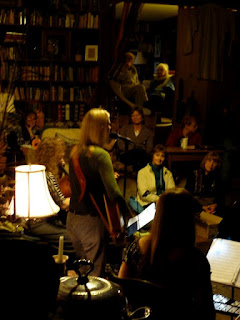