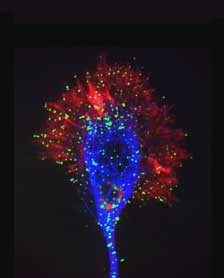 My husband Paul Williams, as many of you know, lives in a nursing home with early onset of dementia-due to a brain injury he sustained in a bicycle accident in 1995. Paul had the kind of recovery from that accident that his doctors called 'miraculous' at the time. He went back to writing books, lecturing about things he was an expert in, editing the Complete Collected Works of Theodore Sturgeon, fielding interviews on scifi writer and friend Philip K Dick, and managing the day to day sales and shipments of his books.

Aside from Paul's lousy driving (and it was bad after the brain injury). Most folks wouldn't know he'd had 5 centimeters of his right temporal lobe crushed and then removed in an emergency room brain surgery.  He pretty much seemed like his same old self.

Paul was very fortunate. During the brain surgery one of the surgeons came out to tell me what was happening and what Paul's prognoses might be. They asked what kind of IQ he'd had and I told them what his mother had told me (she'd had him tested as a teen), near 180. "The fact that he had a very high IQ means that he will probably be a little less effected by this injury. But I'm going to be honest, he very well may be like someone with Alzheimer's (the doctor actually said "like Ronald Regan").

So Paul was on the lucky side, he knew everything that he'd known before. His doctors said things could only get better for him now. He couldn't wait to get out of the hospital, rehab, and scheduled and went out on a lecture tour in Europe within six months of the accident.

From April 15th of 1995 (the date of the injury) to somewhere in 2004 Paul was active as a writer, editor and lecturer. He was the "miracle" recovery the brain doctors had deemed him back at rehab.
Then something went very very wrong. 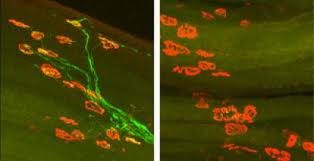 These are images of axon regeneration in mice two weeks after injury to the hind leg’s sciatic nerve. On the left, axons (green) of a normal mouse have regrown to their targets (red) in the muscle. On the right, a mouse lacking DLK shows no axons have regenerated, even after two weeks.

Paul's brain, as smart as it was, could no longer hold back the tide of the inevitable that was now upon it, circa 2004. When he had his initial injury, in 1995, microfibers of his brain, neurotransmitter-super-highways called Axons, were cut and those highways closed down for good. But much like his brain surgeon told me; "Paul can take other side streets, it may take those electrical impulses longer but they can still arrive at their destinations, it's just that 'freeway 5' is now closed for good."

For almost 8 years Paul's brain seemed to do very well, wagering those side streets. For a while that brain kept getting better. Rarely was it at a loss for words, or memories; short or long term. But those Axons (super-highways) that were broken from the accident didn't stay broken in the same way. The road began now to break down further, slowly, mile after mile. The Axons began to regress taking away more ability to handle the movement of electrical impulses.

And how did that look. It looked like Paul was sleeping much of the day, that he became unable to handle simple daily tasks, he forgot where we were reading in the book The Life and Death of Peter Sellers, and he kept reading me the same page over and over. He struggled to do our taxes April of 2004, lost his temper and bit our 2 year old son on the arm when the boy tried to get his dad's attention. It was like his brain was losing control.

That initial break in the neurotransmitter highways is called a traumatic brain injury, but the subsequent retraction of the axons, worsening the ability of the electrical impulses to get around the brain, is what became of Paul, "Early onset of dementia/due to a brain injury".

Sheesh, I got it! Just today at a lecture by Yimin Zou, Ph.D., UCSD, where he talked of new research on regenerating growth of those axons, mostly in spinal injuries (by inserting antibodies into the lesion and blocking the "scabbing" effect of WNT which blocks regrowth of the axons,..../blabla, something like that)...and his precise telling of how it worked made it all click into place. With a little deductive reasoning I began to piece together what happened to Paul.

I raised my hand and asked Mr. Zou; if the retracting of the axons was what caused football players with head injuries, and others, to fall into dementia later, and he said "yes, exactly, that is what happens. And it can happen sooner or later".

Now I know. It was a mystery that no neurologist could figure out at the time. They didn't know this much stuff 8 years ago, apparently. Paul, who'd been having severe anxiety attacks, saying he was "losing his mind" had a psychiatrist through our HMO and the guy insisted, insisted, Paul was falling apart because of his acid and drug use when he was younger. I knew that guy was out of his mind-wrong. And he was. He didn't know about axons and WNT's, and proteins....and the new research that might be able to regenerate growth of those most beloved super-highways.

We went round and round to different specialists to try to help Paul: anxiety and depression? they recommended psychiatry. Clumsiness? Neurology. Neurologist sends us to an expert outside of the HMO, they didn't even figure out Paul had dementia for 2 years, he always answered the questions correctly: "who is the president and what year is it".  It wasn't until Paul showed up, unbeknownest to me, at the expert neurologists office disheveled and confused, did they decide it was some sort of dementia he had, not just a psychiatric disorder...

This was only 6 to 8 years ago. Since then much has been made of post brain injury dementia via the NFL players that have succumbed to it, some donating their brains to research. New research is giving us hope that spinal cord injuries may possibly be repairable in the near future and according to Dr. Zou, brain injury research, very closely related, is not far behind.

And today I found out what happened to Paul. And for some reason I'm excited and relieved to know.


Thank you to the San Diego Brain Injury Foundation for hosting Dr. Zou's very informative talk at their November meeting