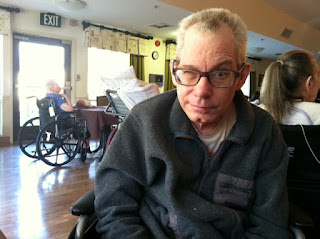 Here's Paul yesterday at lunchtime at the nursing home. Alexander and I rose him out of bed, fed him 1/2 a milkshake which energized him enough to get into the wheel chair and we wheeled him into the mess-hall. These days Paul needs to be fed. He just forgets, I think, that he has food in front of him and his appetite is flagging somewhat. He really enjoyed looking at his 10 year old son, who was sitting nearby reading a book. I couldn't help but think that Paul was thinking "Gee that's what I was like when I was his age"

And what is it with the haircutter person at the nursing home. Months ago I asked for something where he could have a little hair on his head and they went for the late 60s look with his hair hanging in his eyes and then the ponytail because they didn't know what to do with the long hair in his eyes. So a week ago I asked for something short but not a military buzz, something I guy would ask for at a barber shop. So it seems there is only too long or too short.
Posted by Unknown at 1:35 PM