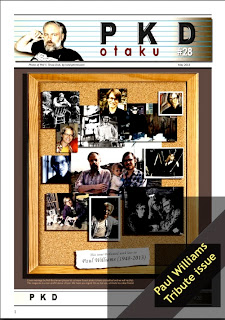 "We ought to remember, here in our PKD niche, that Paul
was multi- faceted. He is certainly going to be
best remembered by the public as a music journalist, a genre he essentially created with his magazine Crawdaddy. To his friends and family, of course, his memory will run much deeper. He was a journalist, true; he was also a husband, father, brother, son, colleague and friend. That he was a good friend to a California science fiction writer named Philip K. Dick was a lucky accident for both of them – and for us. I like to think that, somewhere, Paul and Phil are sitting around a kitchen table, fiddling with a tape recorder, listening to Moby Grape on the stereo, talking about the universe and life, reality and what passes for reality; relaxed, laughing, enjoying each other’s company once again and maybe forever."

*     *     *
"On my shelves are 13 volumes of Theodore Sturgeon’s Short Stories. They wouldn’t be there if it wasn’t for Paul Williams. It was his mis- sion to do for Sturgeon what he had previously done for Dick (he men- tioned as much in the later PKDS Newsletters). He began the Sturgeon project before his ac- cident, but tragically was not able to write the story notes for the last two volumes ‘Slow Sculpture’ and ‘Case and the Dreamer.’ The whole set being eventually published sequentially, volume by volume, be- tween 1994-2010. It was Paul who dreamed it. He succeeded. I treasure the stories and I am grateful to Paul for making these beautiful volumes possible."

An excerpt from  Nick Buchanan's tribute in PKD Otaku

*     *     *
I never met Phil, so I made it my mission to meet Paul. Once I had decided (in the late 90s) to write a novel with Philip K. Dick as my “Guide to the Other Side” I soon learned that Paul was the Key Master to the PKD Gate. His name was turning up everywhere. He had been the first
one to sort through the massive Exegesis pile of papers and devised the manila folder organizational system. At that time access to the Exegesis was as elusive as an an- cient codex. Lawrence Sutin’s In Pursuit of VALIS had only whetted my appetite in my search for what was “really real” for Phil. I was convinced I had to read more.
Another book I found early on was Welcome to Reality: the Nightmares of Philip K. Dick (edited by Uwe Anton with an introduction by Paul Williams.) This guy again, I thought. The open of his intro is particularly eerie now:
(Paul Williams) "Many years ago (I was 20 years old) a close friend of mine died, a young writer for a New York news- paper. After the funeral, about ten of us... gathered in a nearby apartment and talked about our friend who was gone. As we talked it was like he was still there, not just the memory of him, but his actual presence, so real it amazed me. I realized at that moment that we live on not only in our own bodies
but in the conscious- ness of the people we’ve touched, all the people who have truly felt our pres- ence in their lives. This was not an idea I had but an obser- vation—I could see, feel, and hear my dead friend alive in that room.
“In 1982 another good friend of mine died, the writer Phil- ip K. Dick. The per- sonal loss for me was great—no more late
night phone calls, or talking enthusiastically with him in his southern California apartment while he sat with twenty different cans of flavored snuff in front of him, taking a pinch from each can in suc- cession. But because I’m also a writer, I found my- self worrying about all the brilliant work Phil had done that hadn’t been published yet... I realized, perhaps instinctively or perhaps guided somehow by my dead friend’s spirit, that the way to keep Phil alive... was to gather the people who loved him, who had been touched by him, and in whom he still lived... his readers. So with the support of his heirs, his children, I started the Philip K. Dick Society.”

An excerpt from E.J. "Jami" Morgan's piece in PKD Otaku