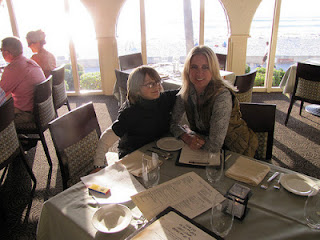 On Monday Alexander and I visited Paul's oldest dearest friend, David Hartwell, an editor at Tor Books, at the La Jolla Shores Hotel for dinner. David had told me about this trip to San Diego over 3 months ago and we had hoped he would be able to visit his friend one last time, ..alas. 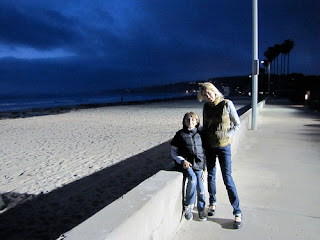 La Jolla Shores boardwalk at dusk. David was in town for a symposium at the new UCSD Arthur C Clarke Center for Human Imagination. On Tuesday and Wednesday there were panels and lectures on all kinds of cool crazy stuff, the agenda offered talks on: Starships and the Fates of Mankind, Noah's Ark Eggs and Warm Blooded Plants and more wild sounding titles.

I was able to talk Alexander's teachers into letting him ditch school for a day so we could take in a day of physicists and science fiction authors at the Starship Century Symposium. They agreed so long as he
could tell the class a bit about what he'd seen and heard.

Alexander: "Most of the talks were pretty interesting. Not all of them were about building a starship, like the talk on a 15 kilometer tall tower, but they all seemed really interesting, and it showed how we'd have to advance in technology a lot for these things to become real. Like, for example for the starship, we'd need to advance in rocket engine technology instead of using old rocket fuel. Nuclear-thermal rockets were talked about. For the tall tower an advancement would be how to keep the steel from buckling and also how to keep the wind velocity from knocking it down-using things like jet engines to push back the high winds." 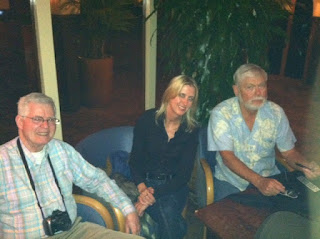 Thanks to David Hartwell and Gregory Benford,  we were able to get passes to the sold out event. Gregory is a science fiction author and an astrophysicist and a long time friend of Paul's via the sf community. He had this to say about Paul Williams
at File 770
“He was a stone sf fan from junior high, deflected into rock, but with the instincts of a fan and the smarts to see where rock could go, following the curve of sf and jazz and earlier American inventions. His kind of cross-conversation invigorated all fields he touched, from Dylan to Sturgeon to Phil Dick to all those idiosyncratic visionaries who lurk among us, bless them all in their fevered pace.” 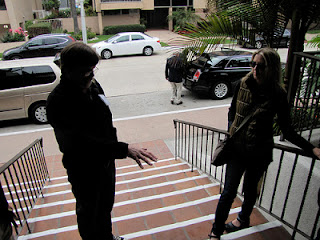 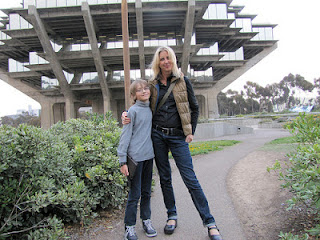 In front of the Theodore Geisel (aka Dr Seuss) Library UCSD 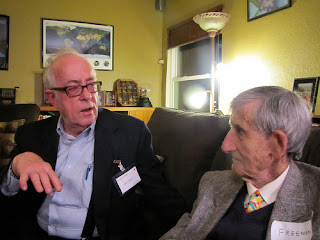 This is Freeman Dyson on the right, he is an influential physicist, a free thinker and visionary and his talk on what it would take to move us outside of this solar system was colorful and mind-expanding. Images that stick with me: plants that grow on ice, sail-starships, eggs that contain DNA for life and are made for terraforming planetoids, sleep-ships (like in 2001 Space Odyssey) vs "download"-ships which contain human-cloned DNA, and giant mirrors orbiting distant planets-far from the sun- which are able to reflect enough light onto that world to make it 'habitable'. Not only that, ...Dyson is 90 years old.

Dr. Jon Cramer is seen here on the left, he's a Professor Emeritus in the physics department of the University of Washington (and in fact, knows Alexander's grandfather, Bob Williams, who was also a physics professor at UW). David Hartwell very thoughtfully, brought Dr. Cramer around to meet with and talk to eleven year old Alexander. He told us about his recent experiments and discoveries including the sound of the beginning of the universe.

sound of the big bang

Alexander on meeting Dr. Cramer: "It was pretty cool that I could understand some of what he was talking about, like the Quantum Entanglement Theory, which is about two particles being linked together and being able to send messages back and forth between those particles. However I did learn some new things such as being able to send those messages back in time. It was pretty cool that I could meet and talk about these things with him." 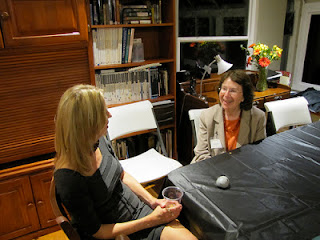 The after-after party, with me and Gloria B. Lubkin from
Physics Today

All photos by David Hartwell,
except the photo of me and David and Greg, which is merely my iphone