The Meaning of Lights

Two lights way up on the sheer face of a hill, in the dark. One light up higher the other one lingering beneath, waiting to be joined by the slow moving upper light. Over the course of an hour we watched, from a fundraising party w all it's lights and soft nostalgic rock, and there at the side of our consciousness these two climbers found there way back to one another in the dark Mission Trails Park.

By the time we left they were still half way up the hill but nearer to one another. Two lights helping one another down the rock face of life. That's companionship.

I've had some time now to think about partners, lovers, companions since not being immersed in one. At first it's like. WTF! And then things settle down and you remember it was you there all along. Nothin' really that different. Two lights are a nice thing when they help each other on the rocky stuff, but it's not worth it if it causes the rocky stuff.

Before I made my first Rhino album I was living in San Diego and the recording engineer at the studio I sorta managed, made a cassette of some Velvet Underground songs. It was amazing of course. Life altering, the kind that makes you feel like 'how did I live without this before?'. I read whatever I could about the Velvets and the Warhol scene. The year before my friend David Ruderman gave me the Sheldon book on Dylan, and now the Velvets brought a different perspective on NY scene. I had to figure out a way to get out of San Diego.

Right after that I got some money from my tax returns, $700, it seemed like alot of money. I bought a $400 Greyhound Bus pass that allowed me to go around the U.S. wherever a Greyhound would go. The day I bought my ticket a lady behind the counter gave me her old Greyhound busline tome that showed me every line in the country. It was amazing I could anywhere. And I could do it for the length of the pass which was one month.

After a week and a half of the rest of the country, I ended up in Port Authority, New York City. First time, for this Los Angelino. Already, the smells, the bums, the different ethnicities of humans, the buildings, I was utterly in love.

Within a month I met most of the musicians that became the foundation of what we called Anti-folk. Lach, Kirk Kelly, Roger Manning, Billy Syndrome, and a handful of other musical losers we were. Playing at the newer, not even the old one, Folk City, and some place around the corner and these places didn't like us. Mostly because we had the nerve to laugh at their outmoded concepts of acoustic music. We wanted to be the Lou Reed, Dylan, Phil Ochs, Woody Guthrie or whatever of our day. We wanted to make our own downtown New York scene. So we did it....weirdos that we were...Tryin' to remake the cool New York thing that we'd heard in the grooves and seen in black and white photos. 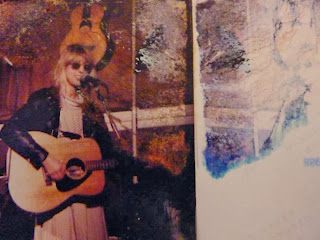 There's a film that my friend and drummer Debbie Fluffy Spinelli made of us touring around the east coast around a few years later. I just got a copy of it recently (in fact hoping someone can help me find a way to get it copyable and get up here). At any rate, it's us nodding to our roots, that New York 60s thing. And I thank you Lou and others for that great great inspiration you gave us.

When you cry, let it be fierce, let it bring down the empire of clouds

I don't know why I haven't been into writing lately. It's been a strange time. I'm sorta putting one foot in front of the other doing things the seemingly right way. Working when I need to work, resting when i need to rest. Seeing friends and doing taxes. It's not the least bit fun. But it's okay. I don't have a husband in a nursing home anymore. I don't Have to be here in Encinitas. But my prime directive has shifted to some place I can't pin down anymore.

I don't mind getting down the mountain by myself in the dark so much. I'd been afraid how that might feel. I mean, I was with Paul for over 20 years. But I always did stuff on my own anyways and with varieties of friends. That's the musicians way. There's just something, rather comforting I suppose, in thinking that there is another light there that is waiting for you to take your next step down, closer to ground and the way out of the park.

We stood with a park ranger watching the two lights descending the mountain. "Has anyone ever gotten stuck way up there all night?"
"Sure have" he said, "helicopters came in the whole thing. But nothing 'til morning. Pretty wild out there, so those folks will have to make it on their own." 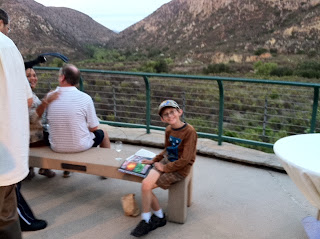