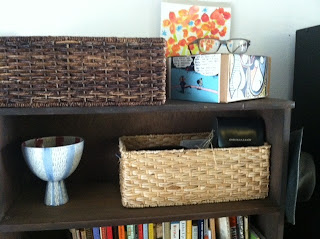 3:20am...
Awoke from a dream very suddenly with my heartbeat at 200 beats per minute. It's a jolt and a shock but it's happened before, it's called supra ventricular tachycardia. I got out the bag of ice and dumped it into a large bowl, filled it with water and plunged my face into it. Holding my breath and counting to 50. Heart rate still up, I come up for air and do the plunge again. This time the heart rate skitters a beat and returns to a normal, if slightly high pace. I throw on some shorts and step outside into the damp, cool beach air. Only a few stars peeking through the marine layer. It's June.

In the dream I was at a theme park with Paul. We have been looking back at obscure songs that are acknowledged in colorful displays here. A few Disney type songs, some Japanese girl singers, some 60's girl-group singers. We wander through the park with it's colorful and melodic dioramas.

By the end of the dream Paul and I are hunting through shipping materials, stationary, and office equipment at  some kind of big box stationary warehouse. We are crawling through the stacks of stuff, over and under shelves. One of us says "remember the old days when we used to have to climb up to the top of these shelves to get the stuff we wanted?"

Then Paul was talking about the music we'd just experienced at the Obscure Music Theme Park and the artists we'd taken in and watched and positively interacted with, and then Paul said about himself "I'm very good at that".

I might not have been exact in my understanding, I wasn't sure just what he meant, but I agreed. And he was very very good at a number of things, but particularly; being supportive of artistry whether that artists work has been acknowledged by other pundits or not.

Paul was usually one of the first responders on the scene of a new musical visionaries work. He was a fabulous Sir Lancelot to an artists King Arthur.

Years ago I asked him what he thought about a local artist that we knew, that had gone national and he said "You have to wait and see the body of work to know whether they are an artist or not".

The dream ended with me hanging out with the "healthy, Paul-pre brain injury" again, climbing around the great big shelves of the stationary store, while he threw, sometimes handed carefully items he needed for the office.

Paul's remains live in a box now, not unlike the boxes of books he'd tape up and send out daily, usually first thing in the morning. The screech of the packing tape pulling from the dispenser, applied to cardboard, a little extra over the name and address of the recipient.

When the cremation company had me come by to fill out various papers regarding Paul's death they had me look over their racks of urns. About two dozen urns. At the bottom of the shelf was a taped up box. I asked if Paul's ashes could go in there. The lady said "that's the box the remains come in darlin'"and I said "that will do then, that's what Paul would want".

That box lives on a bookshelf now, that oversees the whole of the living room. The box has Picasso's Girl Before Her Mirror and a Krazy Kat comic and a few playing cards pasted on it. Stuff Paul liked. And his glasses, the last pair, are atop the box so he can survey the room and all the stuff we are doing-watching me scribble this down in a book at 3:20am.

I think my heart has sincerely settled back into it's slower more regular rhythm now, and I can go back to sleep. 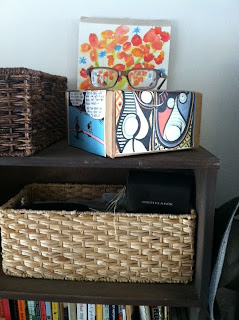