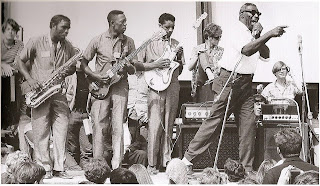 Photo by David Gahr
That's Paul Williams on the right, diggin' the sounds of Howlin Wolf, with Grace Slick on his right. At the Newport Folk Festival 1966. Though he looks kind of like a sound engineer (cupping his hand to his ear) he was just a fan that got to get up really close to the action.  CRAWDADDY The Magazine of Rock would have been out and in circulation, it's first issue coming out through Paul's dorm at Swarthmore in February of 1966. This photo was July of 1966 and Paul was handing out CRAWDADDY's like candies, everywhere he went, meeting Jac Holzman and getting him interested in placing ads in the magazine.

"If You Hear Me Howlin'"