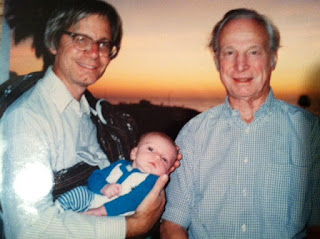 Paul holding one month old Alexander, must be November 2001. Paul's father Robert Williams came to visit us after the arrival of the new baby. Robert an Emeritus Professor of physics at the University of Washington and also a contributor to the physics work at Cern in Geneva, visited us several times over the years and stayed at our favorite beach motel a block from our house. 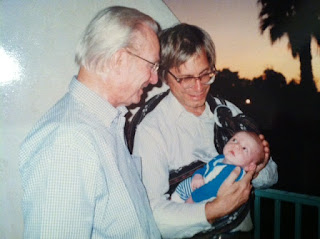 Here little Alexander seems to be sussing out the situation from the two wise men. Years, earlier, in 1995 when Paul was in the hospital for the brain injury Robert came to visit and I spent many a dinner with him talking and questioning him about his time working under Oppenheimer during the Manhattan Project at Los Alamos. I'd read the Richard Feynman books, loved them, and got a real kick out of these first hand stories of Roberts.

One of the real 'take-aways' from that extraordinary time with Paul's father was how sad he seemed to be, or maybe a better word is 'lost' on how to be a father, especially in a crisis time. My job ended up being of a reassuring nature, helping him see how Paul was improving (and he was). Robert was quite unnerved by his sons injury, and I suppose fragility. Paul seemed to have a kind of invulnerable quality to his personality, an incautious, reckless intellectualism that made him seem sorta unbreakable.

At any rate, here in these photos, 6 years after the brain injury, father and son are in a jovial mood and taking pictures with baby and a sunset over Moonlight beach. This was a time of so much promise; we had been separated and now back together, a beautiful baby boy, and Paul was looking deeply into himself finding new ways to create balance in his emotional life, and we were very active in the Buddhist community around Thich Nhat Hahn's Deer Park. A lovely, though mommy-tired time. 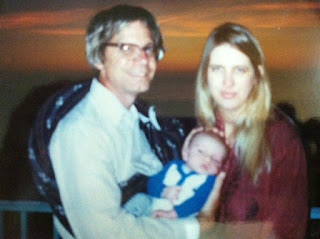