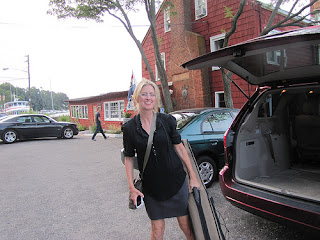 (Photos by David Hartwell, except where indicated)
Another photo from the Old Mill Inn, Mattituck Long Island, this place was so picturesque with boats docking right alongside the back patio 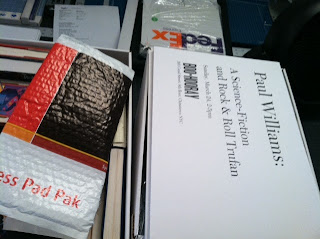 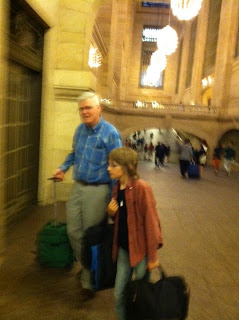 (clb)
then, hustling to catch our train out of NYC, and on to Pleasantville, where we pick up the car and high-tail it for Westport, NY about 6 hours up the state and on big beautiful Lake Champlain 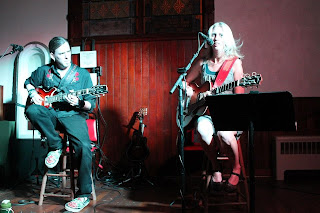 (photo by Kathryn Cramer)
Performing with Geoffrey Hartwell at a hall in Westport, NY 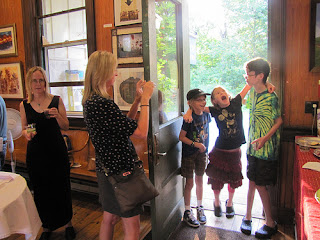 We caught an art exhibit in the old train station in Westport. It was great having a day off here. I could hang out with my long-time-no-see friend Kathryn Cramer and Alexander got to know her (and David's) kids. She drove us around other parts of the area and we met some cool folks and saw farms where "slow food" is being grown. There's a "slow food" cafe on the corner by my place here in Encinitas and it was cool seeing a farm that's gone back to using the old horse and plow method and totally organic. I can dig it.

We split the Lake and drove through Vermont, stopping in Middlebury at a tea shop that was exceptional. It was me and Alexander. David and his two kids, Elizabeth (10) and Peter (15) and we all had a lovely cup of authentic and lovingly made tea. Then we hit the road again and drove all the way to the coast reaching our destination of Kittery Maine. The next morning we hit the "beach"... 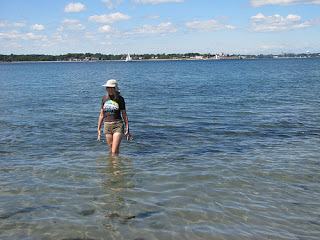 ...which was really a harbor...Alexander took one look at the stuff under his feet and said "this isn't a beach and that black stuff isn't sand and those rocks.. don't make a beach" This was quite different from our Southern California version of beach... 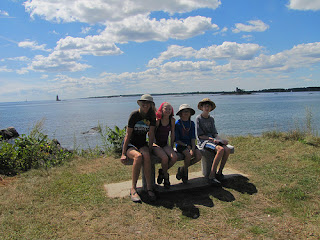 But the views were amazing and the sky, very different colors and shapes of clouds. Look at that blue... 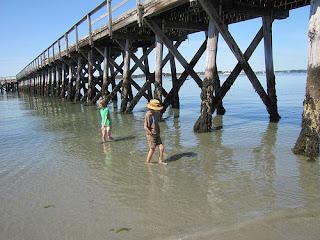 Another thing: the water was freezing. I used to go in the water on Long Island when I lived in New York years ago, but this water in Maine, it was really cold. Ankle numbingly. 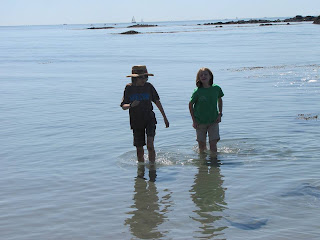 I love this photo of Alexander and Elizabeth. The kids were having a great time hanging together. 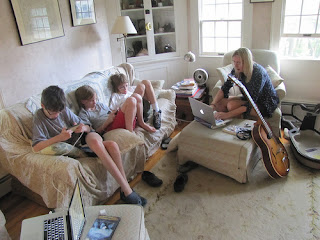 A big part of their fun was playing MineCraft on their iPhones ( I had to loan my out to Alexander so he could join in). They were actually linked together in the game, and interacting...Here we are socializing. Except maybe not with one another. 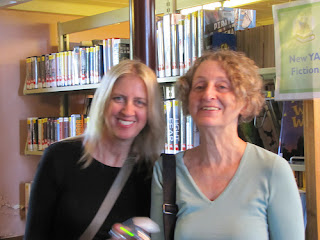 The next day we drove into Portsmouth, New Hampshire with our wonderful hostess, and fab mystery (and SciFi) writer Sarah Smith. Sarah's husband, Fred Perry grew up next door to the house they now occupy during summer months. It's an adorable old wooden 2 story that was built in the 1800s by a fisherman and is just a few blocks from Kittery Point with it's docks and rocky beach's. 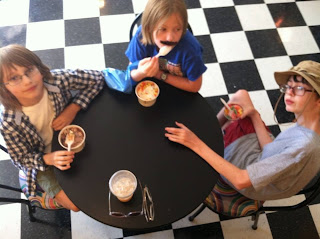 (clb)
In Portsmouth we hit a toy store and Elizabeth got dad to buy her a plastic mustache then we checked out the local ice cream joint. We spent a while in a used bookstore down a side street and I found a book of Jim Carrols' I hadn't seen before, came out just before he passed away, Void of Course: Poems 1994-97.
Which starts like this:
Genius is not a generous thing.
In return it charges more interest than any amount
of royalties can cover
And it resents fame
with bitter vengeance 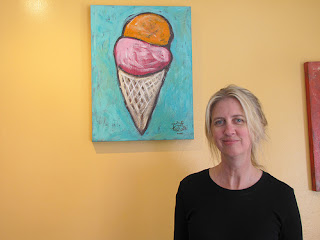 It was a great pleasure to walk the streets of Portsmouth, duck into old bookshops and talk of writing and inspiration and love's roll in the creative process with Sarah. Sometimes being with a fellow artist, after being away in the world of mom's and day to day life, one becomes exceedingly thirsty for a conversation, however brief, with a fellow creative sojourner. 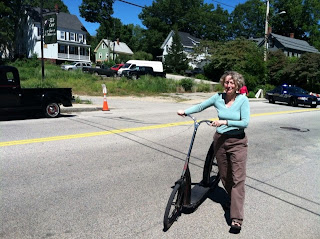 (clb)
Here Sarah, in Kittery, trying out an old fashioned early 1900s scooter at the Library book fair day. We all gave that thing a shot. The precursor to skate boards and the (always stupid) Segway.
That night we had a lobster feast. Fred's brother walked me through the stages of taking a full lobster apart and eating it effectively. Alexander was disgusted with the lot of us and left the table. 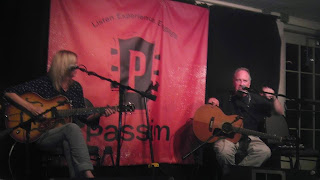 (Laurie Lynn)
I was probably most excited about the gig at one of my all time favorite venues, Club Passim in Cambridge MA. Then I woke up the day of the gig, still in Kittery, and received a shocking text from someone close to my co-bill partner, Mary Lou Lord. She had fallen off of a fire escape, trying to get into her own apartment and was in the hospital with a broken hip, pelvis and leg. It was an awful way to start a Sunday. At first I was in disbelief, maybe it was a prank text. But I checked with mutual friends and it was all too real.

I didn't know what to do about the night. It was billed as a special event where Mary Lou and I share our songs and stories and highs and woe's of love and mystery of the muse. She was someone I could relate to and I'd been so psyched about our night together. I had to re-think. Should I cancel. I wrote to the club, they expected I would. But when would I be out here next, plus I put Alexander's first day of school, a Monday on hold, so I could do this one last east coast gig.

Sarah came to my aid and called friends, who recommended friends of friends that were songwriters. Eventually we arrived at a songwriter from Maine with the surprising name of Cormac McCarthy (nope not the author). He said "Oh what the heck, I'll do it" and so we did the show together. It was a wing-it kind of night but he sounded great and it was a kick getting to know a New Englander with songs and stories about growing up in the area. Thank you Cormac for jumpin' in and salvaging the night.

Meanwhile Mary Lou Lord continues to improve and just went home from the hospital in the past few days and is back on line writing updates about her recovery.

We woke up on Monday morning at Paul's brothers house in the Boston Area. Eric Williams was a wonderful host and we had a lovely brunch with he and Tom Fels from Amherst University. Talking about Paul Williams books and his archive in my storage back home. I was tired but they were understanding and we got to the plane on time, and flew home, with school and work starting right back up the next morning at 7am...