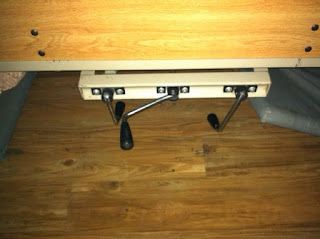 The crank at the foot of Paul's bed with floor mats to either side, because the bed does not have rails and he could fall out and if he did then the floor mats would ease the fall.

The good news is he is getting fluids and his sodium numbers today prove that.

Today I spoke with two nearby nursing homes, one of them is just fabulous, a place I'd wanted him to go to 4 years ago when I was hunting for a place that would take a 60 year old man. Now that Paul is MediCare/Medi-Cal it may go a little easier.

The second place pretty much flatly said no and had a bunch of reasons for it. Sadly, most nursing homes don't want men, they prefer frail older women, and/or someone that can walk (flight or fall risk). I explained that with Paul he is no longer walking, is quite frail and nearing the end of his life.

Geez, I hate to say that. I want to be all chipper for everyone and say that he's over this ordeal and things are getting better. The reality is that he hasn't returned to the way he was two weeks ago when I posted the pictures Alexander took of me and Paul, along with his musings about his dad.

Paul is quite frail now, 122 pounds curled up in a perpetual fetal position, and he handles most encounters with other humans with an emphatic "No" to nearly every question.
"Do you want some real milk-shake with ice cream"
"No"
"Do you want to get up and go outside with me"
"No"
"Can I sit on the bed"
"Noooo"
"Can I get you dressed"
"Nooo!"

Tonight, after work/school,  we dropped in and saw Paul for a few minutes. The sweetest thing was the smile Alexander got from his dad when he came up close enough for Paul to recognize him. He is still in there, it's just that you feel like he's fallen into deeper darker waters, he's harder to reach.*

The good news is his numbers indicate he is hydrated.

*brings to mind a song on an album Paul and I loved listening to, the first Negro Problem album and the song Submarine Down with it's ecstatic chorus. "Submarine dow-ouun, submarine down..." You might be going down into murky waters and the great unknown but you will be doing it with great swirling chords and a happy descending of tones. And the dark unknown is not such a scary place after all, maybe like the Great Fool, of the Waite Tarot deck,  stepping off the high cliff with a smile on the face...

Submarine Down   by The Negro Problem
http://www.youtube.com/watch?v=K1055YHAGmg
Posted by Unknown at 9:20 PM